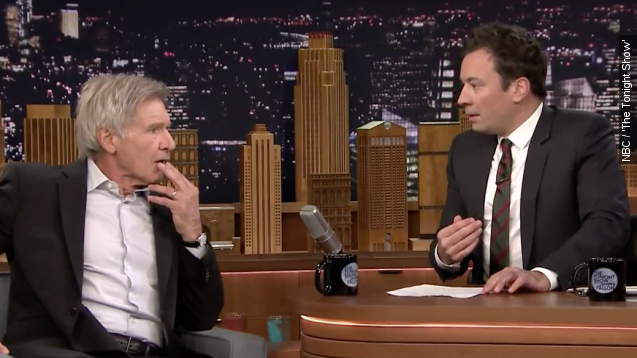 Harrison Ford was really not having any of Jimmy Fallon's shenanigans on the "The Tonight Show."

"How cool is that, right?" Jimmy Fallon asked.

He clearly wasn't too impressed with Jimmy's lightsaber-themed cocktails and was definitely against taking a Greedo shot first.

And just when you thought it couldn't get any worse, Jimmy brought up a sensitive topic — when Harrison broke his leg on the set of "Star Wars: The Force Awakens." Jimmy asked Harrison to demonstrate his injury on a Han Solo doll, and, well ...

"This one they dislocated the ankle forward ... and then they broke this leg," Harrison said.

Yeah, apparently, there's some lingering hard feelings there. But hopefully, it was all worth it. You can catch "The Force Awakens" in theaters in two painfully long weeks on Dec. 18.