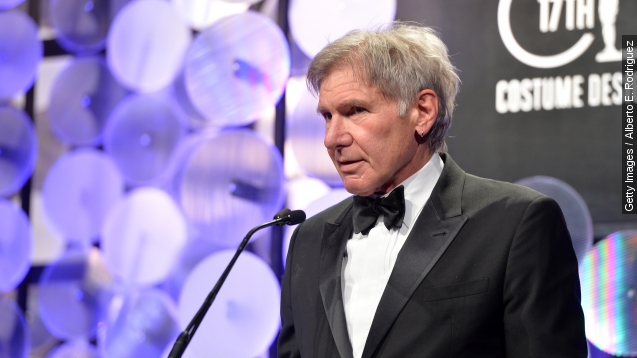 Harrison Ford is back in action, not on set but in a helicopter.

It's only been a few months since his vintage World War II plane's engines failed, but the Indiana Jones actor is flying high again.

We think it's safe to say that fear isn't in his dictionary, despite his wife, Calista Flockhart's, wishes. According to the Daily Mirror, both Flockhart and his former Star Wars co-star, Carrie Fisher, urged him to stay on the ground for a while.

The actress, who plays Princess Leia alongside Ford, reportedly sent him a message that said, "I know you have an incredible bounce back, please take a bounce break for a while."

Ford has been in at least three aviation-related crashes.

According to Airsafe.com, in 1999, Ford was on a training flight in Santa Clarita, California when he and his co-pilot instructor had to make an emergency landing in a dry river bed. Thankfully, the helicopter rolled onto its left side, and neither pilot was injured.

In June, 2000, the Star Wars actor's plane slid off the runway, while landing in Lincoln, NE, because of strong winds in the area. The plane had minor damage, but Ford and his passenger walked away from the scene without injury.

And the most recent crash that we're all pretty familiar with was in March when Ford's vintage WWII aircraft lost engine power.

He landed the plane on a Santa Monica, California, golf course and caused damage to the plane when he clipped the top of a tree before landing. He broke his ankle and pelvis, but was able to leave the hospital three weeks later.

But for someone who has probably been involved in a few too many plane crashes in his life, Ford's passion for aviation sure shines through on the big screen.

Some of his biggest roles have been as either a pilot or former pilot. We're of course talking about "Star Wars," "Air Force One," "Six Days, Seven Nights," and "Ender's Game."

So here's our PSA to you, Harrison: stay on the ground in real life, but may the force be with you on screen.