Harper Lee Releasing Second Book Ever, And It's A Sequel 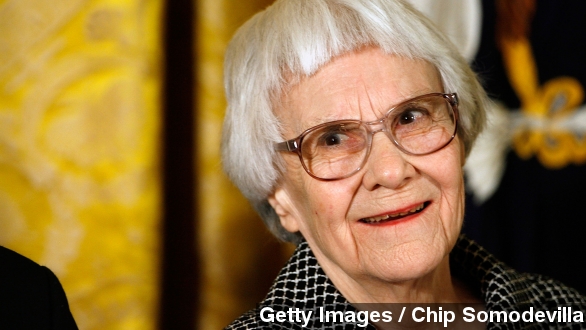 SMS
Harper Lee Releasing Second Book Ever, And It's A Sequel

By Lauren Zima
February 3, 2015
The reclusive author's "Go Set a Watchman" will be published July 14, and the story behind the book is incredible.
SHOW TRANSCRIPT

There are few authors we'd get excited about if they made us wait 55 years for a new book.

But Harper Lee is one of them. Tuesday, the 88-year-old's publisher said she'll be releasing her second book ever — a sequel to her first and only classic, "To Kill a Mockingbird." And the story behind the book is kind of unbelievable.

It's called "Go Set a Watchman" and was actually completed back in the '50s.

Lee didn't know the manuscript still existed until her lawyer found it in the fall in "a secure location,” according to The New York Times.

CNN reports it follows the character Scout from "Mockingbird" as an adult visiting her hometown. Here's what Lee said about "Watchman"'s origins:

"My editor, who was taken by the flashbacks to Scout's childhood, persuaded me to write a novel (what became 'To Kill a Mockingbird') from the point of view of the young Scout."

So, basically, the Pulitzer Prize-winning "To Kill a Mockingbird" wouldn't have existed without this book. And Lee didn't even realize this book still existed.

Lee has led a quiet life and rarely gives interviews but said she is "humbled and amazed" the book will be published.