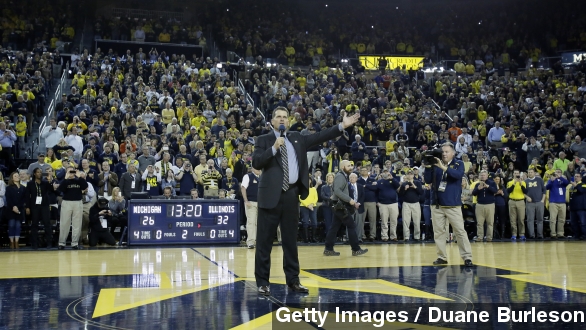 SMS
Harbaugh Heads To Michigan Holding The Wolverines' Fate
By Jamal Andress
By Jamal Andress
December 30, 2014
With Jim Harbaugh's history at Michigan and the desperation of the program the veteran coach is carrying the weight of The Big House on his shoulders.
SHOW TRANSCRIPT

It's been rumored for weeks that Jim Harbaugh was headed to Ann Arbor just as soon as a plane could get him there. And now that pen has been put to paper and the speculation has ceased, here's the kind of change Harbaugh is expected to bring. (Video via WXYZ)

"I was wondering how comfortable or uncomfortable you are with this perception that you are the savior of Michigan football?" asked a reporter.

"I'm not comfortable with that at all," Harbaugh answered. (Video via ESPN)

But author John U. Bacon, who chronicles Michigan football, told WXYZ, "If you come back to Ann Arbor under these circumstances, you are the Savior."

The aforementioned savior is a Michigan man himself, who lead the Wolverines to the national championship twice at QB, held the NCAA passing efficiency record for 12 years and delivered on this.

Harbaugh is signing on to coach the Wolverines for seven years at about $5 million per year, but that very large number can get bigger depending on performance — and he received a $2 million signing bonus.

That means Michigan will be paying Harbaugh about what Alabama pays its savior on the sidelines, Nick Saban. Mind you, Saban has four national titles under his belt, but that's neither here nor there. (Video via Saturday Down South)

Harbaugh will be heading one of the most storied programs in the country. Michigan has the most all-time wins and the second-highest winning percentage in college football history.

The Wolverines football program is also one of the most profitable. It's the third most valuable in the country, according to Forbes, and brought in just over $91 million last year despite the team being only 3 - 5 in conference play. (Video via Smithsonian Institution)

After considering all of those details and Harbaugh's history of revitalizing programs — like taking Stanford to the Orange Bowl and the 49ers to a Super Bowl — it seems there's a lot at stake for the veteran coach.

And while Harbaugh didn't make any guarantees this time, he did offer this.

"Top to bottom, Michigan is about excellence about greatness. and you have my pledge that I will carry on the tradition of excellence  of the University of Michigan football program. Thank you very much."