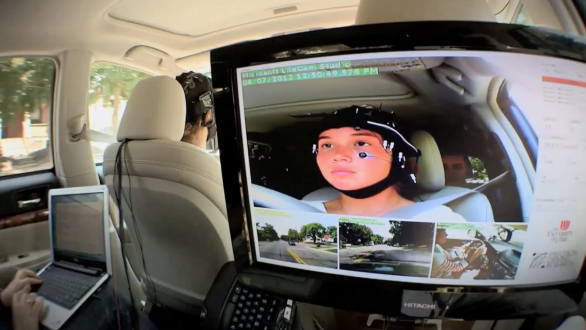 SMS
Hands-Free Tech Could Contribute To Distracted Driving
By Becca Dunn
By Becca Dunn
October 7, 2014
Hands-free systems were designed to help drivers focus on the road, but do they really?
SHOW TRANSCRIPT

New research reveals in-vehicle devices, intended to keep drivers more focused on the road, are actually a distraction of their own.

These hands-free systems are thought to give the driver the convenience of simply speaking to the vehicle rather than looking for buttons to press.

But a study conducted by AAA and researchers from the University of Utah reveals these systems "may unintentionally cause greater levels of cognitive distraction."

For instance, how does this make you feel?

So, just because your hands are on the wheel doesn't mean you're focused.

AAA: "You're not necessarily safer just because your eyes are on the road and your hands on the wheel if your brain isn't geared on driving."

JOEL COOPER, RESEARCH ASSISTANT PROFESSOR AT THE UNIVERSITY OF UTAH: "It has errors, you get frustrated, and you quit and you go back to the manual way. There's this promise of hands-free interaction, but the reality is not there."

The research team used a five-category rating system. The highest level of distraction is category five.

They found these to be major causes of distraction among drivers:

3. Simply listening to a natural or synthetic voice (category 2)

And it's not just newfangled technology. Radios have been around for decades, and last year they were listed as a category 1 distraction.

However, with these recent findings, AAA plans to work with manufacturers to make technology safer while driving. It also encourages drivers to limit their use of technology on the road.