Hamas On Rejecting Cease-Fire: 'It Is Not Worth The Ink' 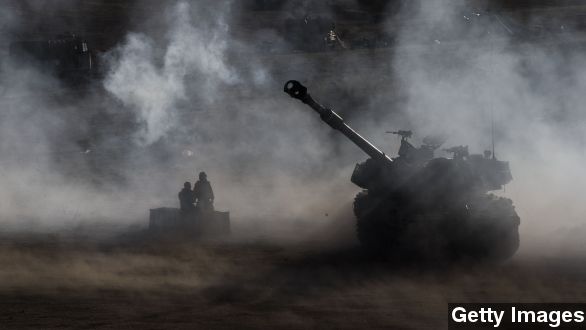 Hamas has given its response to Israel’s acceptance of a cease-fire — and it's not the answer Israel was hoping for. (Via Getty Images)

​In a statement on its website, the militant group's armed wing called plan a "bowing initiative," adding “It is not worth the ink that wrote it.” (Via Ezzedeen Al-Qassam Brigades)

Tuesday Israel’s security cabinet accepted a proposal drawn up by Egyptian negotiators. The truce would have involved a 12-hour cease-fire followed by opening of the Gaza’s border passages and then formal talks in Cairo. (Via Euronews)

Hamas' military wing says it wasn’t consulted and the truce didn’t meet its list of demands, which included lifting Israeli restrictions of travel and trade in Gaza and the release of 50 Hamas prisoners. (Via Getty Images)

Even though the group was under immense pressure from several Arab nations to agree to the deal, its rejection of the cease-fire didn’t come as much of a surprise, especially considering how a Hamas spokesperson recently characterized the proposal.

OSAMA HAMDAN, HAMAS SPOKESMAN: “What they are trying to do is to corner the Palestinians and to help the Israelis more. I don’t believe that this is a political thing to be done. It’s close to being a joke.” (Via CNN)

Israeli Prime Minister Benjamin Netanyahu had previously warned Hamas what would happen if it did not halt its attacks. (Via YouTube / IsraeliPM)

Israeli newspaper Haaretz quotes him as saying, "If Hamas will not accept the cease-fire, we will intensify the attacks against it."

Shortly after, the IDF said on Twitter Hamas had fired at least 22 rockets since Israel called off its offensive.

From the beginning of these latest negotiations, observers were skeptical the Egyptian-brokered cease-fire would work. Although Egypt brokered the cease-fire that ended the last outbreak of violence in 2012, this time around, ties between Hamas and Cairo are strained.​

At home, Egypt's new president is trying to crush the Muslim Brotherhood, of which Hamas is an offshoot. (Via ITN)

According to Gaza’s Health Ministry at least 190 people have died in the Israeli airstrikes, and more than 1,100 have been wounded. The U.N. estimates more than 70 percent of those casualties were civilians. There have been no reports of Israeli casualties.