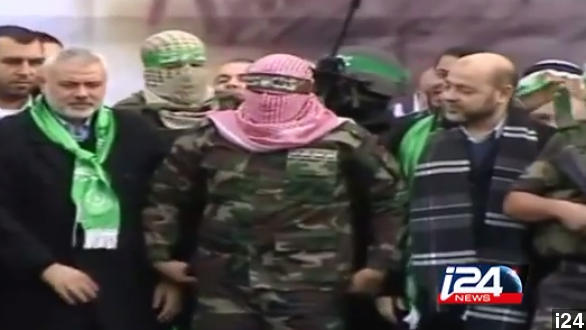 Three and a half months after the conflict that left over 2,000 people dead, thousands of armed Hamas militants paraded through Gaza Sunday in a dramatic show of force, complete with a flyover from a locally-made drone — prompting Israel to scramble fighter jets. (Video via YouTube / Palestine Press, News 0404)

“This illusion called Israel will be removed.” (Video via Quds-TV)

The parade marked the anniversary of the group’s founding in 1987. Ever since, Hamas has stayed committed to destroying Israel and replacing it with a Palestinian state in Gaza and the West Bank. (Video via YouTube / شهاب)

This summer’s war did not achieve that.

But it did achieve a rally 'round the flag effect. Although Hamas has lost support among its traditional Arab backers ...  (Video via Israel Defense Forces)

At home, the group's popularity has soared. An opinion poll released this September showed support for Hamas jumped after the war. (Video via Hamas)

This video includes images from Getty Images and music from Chris Zabriskie.