Americans Seem To Be More Into Halloween On Election Years 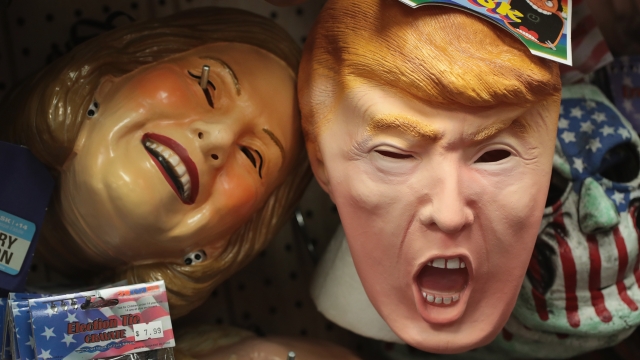 SMS
Americans Seem To Be More Into Halloween On Election Years
By Carter Woodiel
By Carter Woodiel
October 30, 2016
People are spending more money on Halloween than ever this year. Maybe those Trump and Clinton masks have something to do with it.
SHOW TRANSCRIPT

If you feel like you're really getting into Halloween this year, you might have Hillary Clinton and Donald Trump to thank. We'll explain.

Americans are spending a lot of money on costumes, candy and the like in 2016 — more than any other year since people started keeping track. And there's a good chance it's tied to the election.

Now, it could be that people find Trump and Clinton to be particularly scary. But more likely, it's an indicator of a larger trend in Halloween spending. In short, it's going up, and it tends to spike a bit during election years.

Before this year, 2012 had the record for Halloween spending, and there was an uptick in 2008, too, despite a recession-plagued economy. It isn't clear why this happens, but one idea folks have tossed around sounds pretty relateable.

Halloween store customer Diane Martin said: "There's been so much about them in the news, and it's all kind of negative, so I think this is a good way to just not think about it for a little bit."

The election year upticks are actually pretty small compared to the rise in Halloween spending over the past decade. One survey shows spooky spending now sits above $8 billion, up 65 percent since 2007.

Americans can afford to do this in large part because it's not all that expensive a holiday to begin with. One expert told CNBC the roughly 83 bucks people spend this time of year is just a tenth of what people budget for the winter holidays.