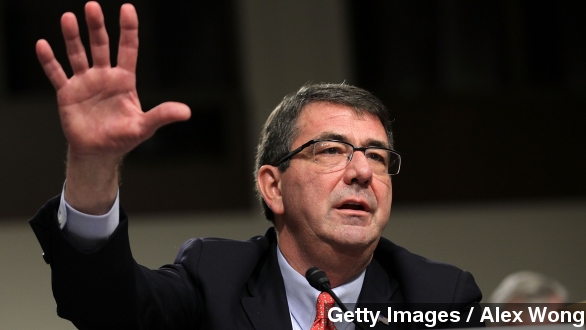 SMS
Hagel And Carter: Comparing The Two Defense Secretaries
By Kate Grumke
By Kate Grumke
February 12, 2015
The Senate confirmed Ashton Carter as Secretary of Defense Thursday. Here's a look at how he might differ from his predecessor, Chuck Hagel.
SHOW TRANSCRIPT

The Senate confirmed Ashton Carter as the new Secretary of Defense Wednesday by an overwhelming vote of 93-5.

Carter is replacing Chuck Hagel, who stepped down in November. Here's a look at how Carter compares to his predecessor.

Carter has a background in physics and first entered the Pentagon under the Clinton administration. He was most recently Deputy Defense Secretary. He doesn't have a military background — a stark contrast to Hagel.

Hagel was the first Defense Secretary who was an enlisted veteran. Before his appointment, he had a business background and had served as a U.S. senator representing Nebraska.

In Hagel's time at the Pentagon, overseeing a decrease of the defense budget was supposed to be his main focus, but legislative gridlock stopped him from getting much done on that front, and global crises in Syria and Eastern Ukraine diverted his attention.

Carter, on the other hand, is seen as a competent bureaucrat who might be able to successfully handle budget cuts. But he lacks the experience on the political side that Hagel had.

Hagel's relationship with the Obama administration was tense by the end of his tenure. He openly questioned the White House's approach to Syria and also admitted he moved slower on transferring Guantanamo detainees than the White House wanted.

"Not everyone at the White House has agreed with how I've handled some of this. I have made it very clear that I will not certify, sign anything to release a detainee as long as I'm Secretary of Defense, unless I am convinced that it is in the best interest of this country," Hagel said.

That tension reportedly led to pressure for his resignation. In a sign of butting heads, Hagel was noticeably absent from Obama's announcement to nominate Carter as the successor.

In matters of foreign policy, Carter is expected to be on the right of President Obama. During his Senate hearings, he said he would not be pressured to rush closing Guantanamo Bay and said he is leaning toward arming Ukrainian soldiers.

"I pledge to you my most candid strategic advice," Carter said. "And I pledge also that you will receive equally candid military advice."