Guys Are Idiots, According To Sarcastic Study 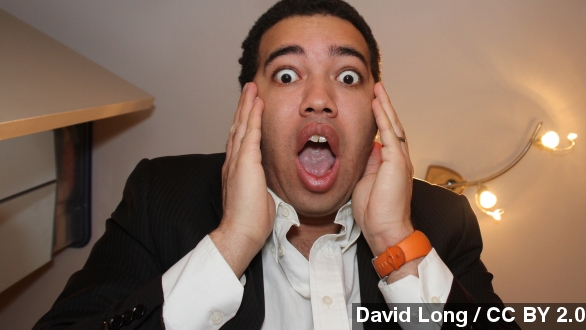 SMS
Guys Are Idiots, According To Sarcastic Study
By Jasmine Bailey
By Jasmine Bailey
December 12, 2014
A study out of Britain suggests men are more idiotic than women based on the rate of accidental deaths and other factors.
SHOW TRANSCRIPT

Have you ever seen truTV's show, "World's Dumbest"?

Or maybe you've checked out a few prank videos on YouTube. "Yo, you got some paper towels or something?"

Now, here's a brain twister for the day — what do most of those idiotic videos have in common? The answer: men! Because men are idiots, and now there's a study that proves it. Bask ladies. Do I sound bitter?

To get the findings researchers in a British study analyzed Darwin Awards Nominations from 1995 to 2014.

One thing Charles Darwin is known for is the theory of natural selection. Which basically suggests the weakest, dumbest, least desirable members of the population die out to make room for the more viable members.

Every year the Darwin Awards "salute the improvement of the human genome by honoring those who accidentally remove themselves from it."

One example of a "winner," in 1999 three men played Russian roulette with unexploded land mines in Cambodia — and blew themselves up.

Through their analysis, researchers found over the past 10 years men have earned the award 88.7 percent of the time.

One researcher explained to the BBC a possible reason for the results. "I think we're just more likely to take risks. ... I think alcohol plays a part here."

But TIME notes the study does cut men a little slack suggesting "idiotic male candidates may have been more newsworthy than idiotic women — but nevertheless concluded that 'men are idiots and idiots do stupid things.'"

Well guys, someone has to sacrifice for the good of human survival — sorry.

This video includes images from Robert Ashby Collection, and  Erin Kohlenberg / CC BY 2.0.