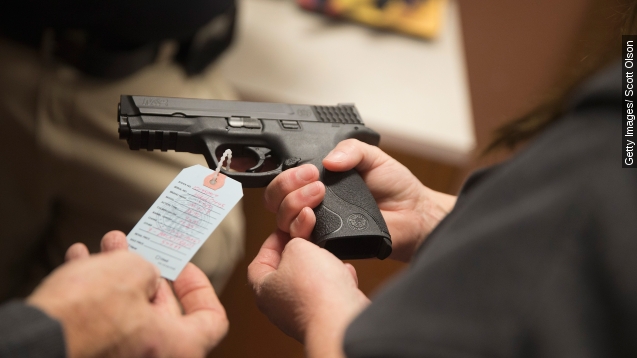 According to the FBI, background checks for gun sales reached a record high on Black Friday, increasing by 5 percent from last year.

The agency processed over 185,000 background checks on Friday, equal to about two checks per second. (Video via WBMA)

But this number doesn't account for all possible gun sales, since the system doesn't check people who buy firearms through unlicensed dealers like gun shows. (Video via CNN)

Obviously, the big Black Friday deals help, but the co-director of the Johns Hopkins Center for Gun Policy and Research told The New York Times the fear of mass shootings and day-to-day violence drives up sales. (Video via WOOD)

ShootingTracker maintains a database online that says we've had more shootings than days this year, but its definition of a mass shooting is when four or more people are shot, but not necessarily killed. That's a broader definition than other agencies.

Before this year, the highest number of background checks conducted on a single day was December 21, 2012, a week after the deadly Sandy Hook Elementary School shooting. (Video via WRGB)

Many politicians, including President Obama, have spoken out about tighter gun control measures, calling for greater action. (Video via the White House)

"In the United States, we have the power to do more to prevent what is just a regular process of gun homicides," Obama said.