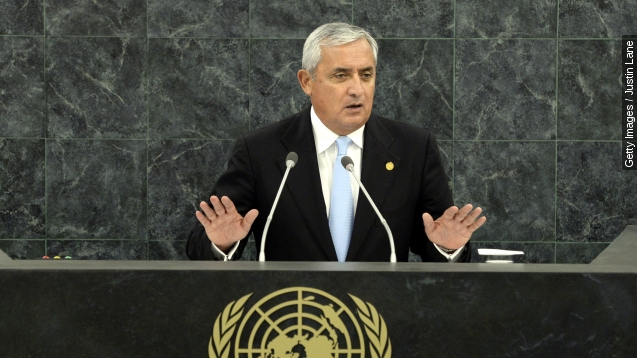 Guatemala's president, Otto Pérez Molina, resigned amid corruption allegations after a warrant for his arrest was issued by the country's attorney general.

The country has seen massive protests after an investigation into Guatemala's government found evidence of bribes paid to government officials by importers in exchange for lower tariff rates. The ring of corruption is being called "La Linea." (Video via Prensa Libre)

The allegations have led to a series of arrests and resignations from high-profile officials of Pérez Molina's cabinet, including the arrest of former Vice President Roxana Baldetti for allegedly accepting $3.7 million in bribes from import businesses. (Video via Publinews)

The former vice president's replacement, Alejandro Maldonado, will likely take over the presidency until the country's general elections, which were already planned for Sept. 6.

"It's a moment where the entire system of Guatemala is shaking," activist and journalist Allan Nairn told Democracy Now.

The country's attorney general's office determined from evidence, including written correspondence and wiretapping, that Pérez Molina conspired with his ex-vice president, which is what led to the arrest warrant issued Wednesday. (Video via Ministerio Público)