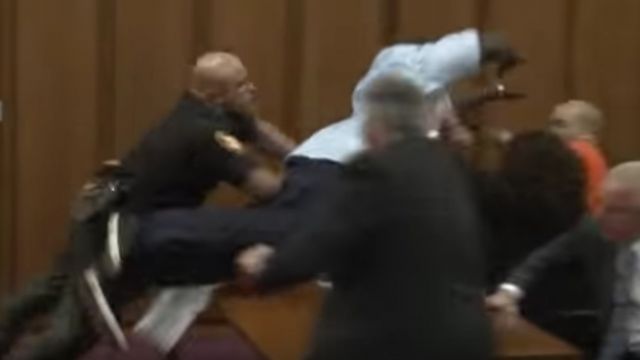 SMS
Grieving Father Lunges At Daughter's Killer In Court
By Calvin Stovall
By Calvin Stovall
June 3, 2016
A grieving father leaped across a courtroom after the serial killer who murdered his daughter smirked at him.
SHOW TRANSCRIPT

Van Terry tried to take the law into his own hands in a Cleveland court Thursday. Chaos erupted after the grieving father, with tears in his eyes, lunged at his daughter's killer, Michael Madison.

Madison, in cuffs, smirked as he hid behind bailiffs before he was escorted out of the courtroom and into custody.

In 2013, the remains of Terry's daughter and two other women were discovered in trash bags near Madison's East Cleveland home. Madison was convicted of 13 counts related to the triple homicide in May.

The 38-year-old serial killer had just been sentenced to death by Judge Nancy McDonnell when Terry leaped at him over a table.

Terry was delivering his victim impact statement to the court when he looked back. Reporters in the courtroom and prosecutors say Madison cracked a smile.

Prosecutor Tim McGinty said: "The man reached a breaking point, obviously. The defendant was taunting him. The man killed his daughter. And this is the type of thing that Mr. Madison finds amusing."

McGinty said Madison never once showed remorse for the killings. "If there was ever a man who deserves the death penalty, this is him," McGinty said.

In 2013, shortly after his daughter's body was discovered, Terry said he didn't want the court to kill Madison.

"I don't want him to get the death penalty, to be honest with you. Release him into our population and (let) him deal with it every day of his life. I think he should suffer like we (are) suffering," Terry told WEWS-TV.

Courtroom footage shows Terry yelling at Madison, "Don't (you) smile at me," while being restrained.

His daughter, Shirellda Terry, was 18 years old when she was killed. Madison strangled and mutilated Terry and two other women — 28-year-old Shetisha Sheeley and 38-year-old Angela Deskins — between October 2012 and July 2013.

This video includes clips from WEWS-TV, WJW-TV and Cleveland.com.