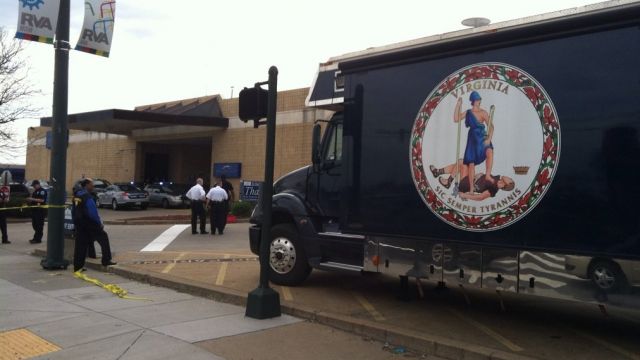 A Virginia state trooper died Thursday after being shot at close range by a gunman at a Greyhound bus station in Richmond, Virginia.

A police spokeswoman said the troopers were conducting a training exercise at the bus station when shots rang out around 2:45 p.m. local time.

"A Virginia state police trooper encountered a male subject just inside the entrance way of the Greyhound bus station, while he was talking to this individual, the individual pulled out a gun and shot the trooper," Virginia State Police spokeswoman Corinne Geller said.

Officials said two other troopers returned fire, killing the male suspect. Two bystanders were also hurt and taken to a nearby hospital with non-life-threatening injuries.

WWBT reports the Greyhound station is in a busy part of Richmond — right across the street from a baseball stadium.

Officials from several agencies, including the Federal Bureau of Investigation and U.S. Department of Homeland Security, are aiding in the investigation. So far there's no word on a motive for the shooting.

This video includes clips from WVEC, WRIC and Richmond Times-Dispatch.