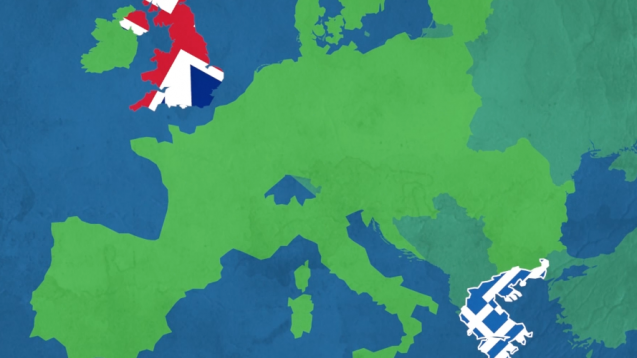 By Kate Grumke
September 17, 2015
What exactly is a Grexit and a Brexit? We break down the European Union policies that make these words more different than they sound.
SHOW TRANSCRIPT

Two made-up words have been talked about a lot in Europe lately: Brexit and Grexit. They rhyme, but they don't describe the same thing. (Video via Conservative Party and Syriza)

All but nine of the European Union countries use the euro.

So, a potential Grexit means the country would leave the eurozone behind and adopt a new currency. But it doesn't necessarily mean Greece will leave the European Union.

While there's precedent for European Union members having their own currency, it would be unprecedented for a member to leave the eurozone. (Video via Bank of England)

Which brings us back to the Brexit, or the British exit from the European Union. The U.K. has a lot of opt-outs from the EU — including that it never adopted the euro — so the country practically already has one foot out the door.

A proposed referendum on Britain's European Union membership was one of Prime Minister David Cameron's campaign platforms, and he won. The referendum is supposed to happen by the end of 2017. (Video via Conservative Party)

Facing a Grexit and Brexit, the future for the 22-year-old union that started as an experiment in diplomacy is anyone's guess.

This video includes music by Bensound / CC BY ND 3.0.