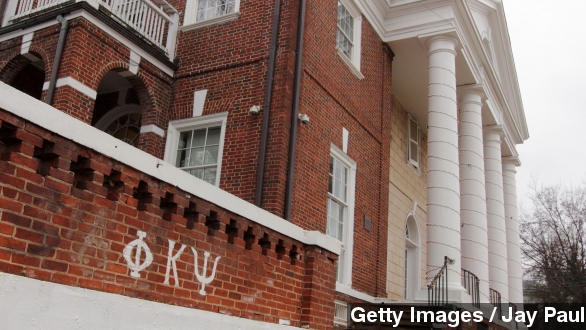 It's innocent until proven guilty, but leaders in the Greek system don't feel fraternities and sororities have been treated that way at the University of Virginia.

Last month, all Greek functions at UVA were shut down in the wake of a Rolling Stone article detailing the alleged gang rape of a woman identified as Jackie at a campus fraternity house. But late last week, the outlet backtracked on the article.

"The attorney for the fraternity here on campus tells CNN several details in that article are plain wrong. He says records show there was no party the night that Jackie claims she was attacked," CNN and HLN reported.

The outlet issued a now-updated apology to readers that says, in part: "There now appear to be discrepancies in Jackie's account. ... These mistakes are on Rolling Stone, not on Jackie. We apologize to anyone who was affected by the story and we will continue to investigate the events of that evening."

Rolling Stone apologized after its reporter didn't contact the men accused of rape. But an apology might not be enough. Greek systems leaders now want Rolling Stone and the school to do something about it.

in regards to the suspension, a joint statement from three Greek governing bodies called for the the University of Virginia to "reinstate operations for all fraternity and sorority organizations on campus, issue an apology ... publicly explain and release all records" in regards to the suspension and "outline what steps it will take to restore the reputation of our groups and students at UVA." The statement also calls on government leaders to "look seriously at the complex issue of how to handle sexual assault on campus."

The University of Virginia is still reportedly investigating the claims in the Rolling Stone article and has not yet responded to the committees' statement.

Still, UVA itself, along with 76 other universities, is under federal investigation for how it handles sexual assault reports.

After Rolling Stone's apology, media outlets criticized the magazine, saying it failed rape survivors. Fox News also pointed out someone else it failed — the woman who told Rolling Stone her story.

"They didn't get to the truth. Maybe she just simply couldn't tell it. Maybe she was bad at telling it. ... They let her down, too," host Harris Faulkner said.

"The hope is that someone will get to the true story and it won't deter anyone who is suffering to go come forward," contributor Jedediah Bila said.

Currently, all Greek activities on the UVA campus are suspended until Jan. 9.