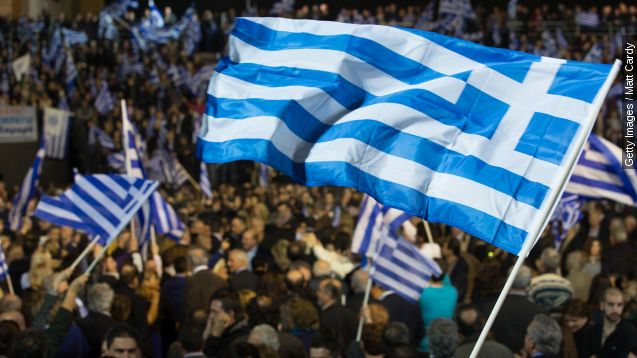 Greek officials are holding an emergency meeting in Brussels Monday as the country continues to search for solutions on paying back €1.6B.

Greece's next big payment is due June 30 to the International Monetary Fund. A default on that would likely force Greece to stop using the euro, which would wreak havoc on the banks that the European Central Bank currently has on life support. (Video via Al Jazeera)

Talks between Greece and foreign leaders have been deadlocked for the past five months, but Monday's marathon meeting could help the two sides find common ground. Greece's Prime Minister is reported to have a potential deal on the table. (Video via Syriza)

"Alexis Tsipras says he has a new proposal that includes a definitive solution. The government won't make the details public, but it's reported to include a further cut to pensions and an increase in taxation in exchange for the Greek debt to be restructured," BBC reports.

A cut to pensions may help the two sides strike a deal, retired state-workers aren't happy about seeing their pensions reduced.

Still, this is all far from a done deal. One European Commission leader called it a "welcome step in a positive direction" and a "first impression" meaning a completed deal could still be a ways off.

Just last week, the ECB loaned Greece up to €3 billion as fears of Greece leaving the Eurozone left many citizens scrambling to pull money from banks.

The Wall Street Journal reports, Europeans stocks and bonds made huge gains as many are optimistic over the last minute deal.