Greece Wants To Pay Tourists To Be Undercover Tax Spies 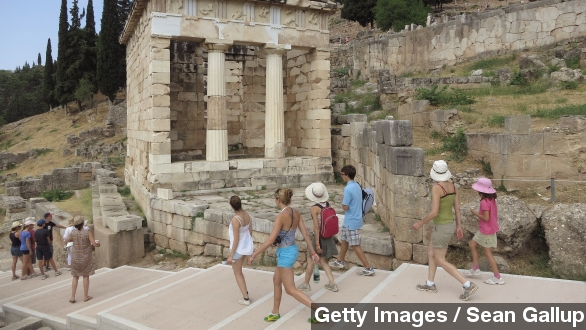 The beaches and archaelogical sights of Greece are famous for tourism. Despite the country's struggling economy, tourism makes up 18 percent of the country's GDP and employs 1/5 of the Greek workforce.

Now Greece wants to take advantage of its tourists in a completely new way.

In a letter to the president of the Eurogroup that was leaked to the Financial Times, Greek authorities proposed using tourists as undercover tax spies.

The letter suggested that the country could hire housekeepers, tourists and students on an hourly rate to pose as customers in areas where tax evasion runs rampant.

The tax spies would be wired with audio and video recording devices to hold storeowners accountable.

That's all to try to address a problem that is one of the factors hurting Greece's economy. As Greece's finance minister writes in the letter, "The culture of tax avoidance runs deep within Greek society." (Video via Euronews)

These suggestions were all part of reforms that the Greek government has to submit to the EuroBank to receive more than 7 billion Euros in financial aid.

The Greek Finance Minister wrote, "The very 'news' that thousands of casual 'onlookers' are everywhere, bearing audio and video recording equipment on behalf of the tax authorities, has the capacity to shift attitudes very quickly."

The Financial Times reports Eurozone officials laughed at the suggestion of tourist tax spies, but reacted positively to the other suggested reforms.

Which is kind of a bummer for anyone hoping to earn some extra money during a trip to Greece.