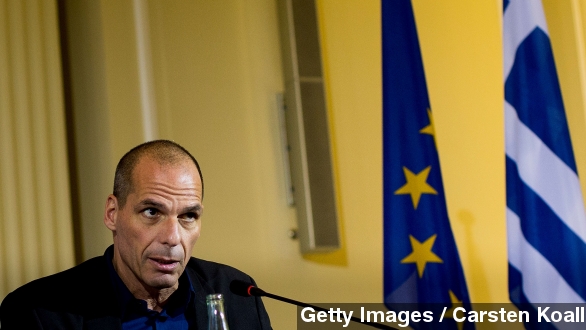 After all the political upheaval in Greece since the election, the reality of an anti-austerity party in power is setting in. (Video via Syriza)

The European Central Bank announced Wednesday that Greek debt could no longer be used as collateral because the ECB couldn't guarantee the outcome of Greek bailout talks. (Video via Arirang)

That's because Greece's new majority party, Syriza, has spoken out against harsh austerity measures previous bailout talks have brought about. Those austerity measures turned public opinion against the bailout providers, including the ECB. (Video via RT)

Now Greece is looking to negotiate more favorable terms, with the country's new Finance Minister Yanis Varoufakis touring the continent to meet with various officials and talk with the press. (Video via Deutsche Welle)

On Thursday, Varoufakis met with his German counterpart to try to soften Germany's stance on reducing Greece's debt, something Germany has strongly opposed. (Video via Tagesschau)

When it comes to negotiating, Varoufakis has tried to argue it's not a confrontation between Greece and its creditors. (Video via Channel 4)

"This is not a question of who's going to blink first; this is not a chicken game," Varoufakis told Channel 4's Jon Snow.

But there is a deadline. Although Varoufakis has shied away from the question of whether Greece will accept more bailout money in the immediate future, the last bailout payment is scheduled for Feb. 27. (Video via BBC)

In any case, the ECB's announcement had very real effects in the Greek market, crashing stocks within hours and dragging the euro down with it. (Video via CNBC)