Greece's Fate Lies In The Hands Of Its Voters 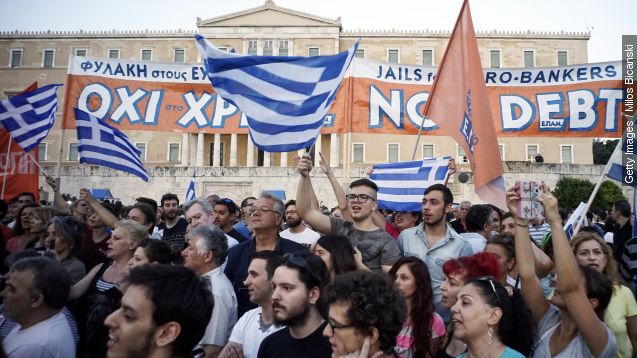 SMS
Greece's Fate Lies In The Hands Of Its Voters
By Matt Picht
By Matt Picht
June 29, 2015
Greece's international aid package has been cut off, and a referendum on austerity measures could be the country's only lifeline to get it back.
SHOW TRANSCRIPT

The Greek economy is on the brink of collapse. After financial negotiations crumbled over the weekend, the country is now facing the prospect of default, economic ruin and a potentially catastrophic exit from the eurozone.

But this latest Greek drama was foreshadowed by months and months of troubled talks and brinksmanship, from both Greece and its international creditors. Here's a brief recap in case you're not up to speed.

Greece's economy is being kept afloat by bailout loans from different international agencies. But the country only received that money on the condition that it would enact stringent austerity measures.

The Greek people weren't happy with austerity, which included heavy cuts to social services. They showed their displeasure in January by electing the leftist Syriza party, with new Prime Minister Alexis Tsipras promising to reject the austerity conditions and renegotiate a deal with Greece's creditors.

That plan didn't work out. After months of talks, Greece's creditors pulled the plug on the loan package. And after months of strenuously resisting austerity, Tsipras has called for a public referendum on accepting those tough measures after all.

Greece's fate now largely hinges on the outcome of that vote. On July 5, the Greek people will decide whether to return to austerity in exchange for a bailout or forego the loans and risk further economic strife.

But international aid isn't just propping up Greece's debt: Greek banks run the very real risk of running out of money. The government has currently imposed bank closures and capital controls to attempt to safeguard the banks' current cash reserves.

Losing its financial lifeline could also prompt Greece to leave the eurozone and start printing its old currency, the drachma, again. That would help give the banks some solvency, but the country would still face an enormous loss of capital from foreign investors.

A Greek exit from the eurozone could cause ripples across Europe, leaving investors wondering how safe their deposits are in other weak European countries. EU leaders have been planning for this contingency, however, and say the risk of contagion is minimal.

Greece is set to miss its first loan repayment to the International Monetary Fund on Tuesday. How the IMF and the world respond to that default could largely be determined by the referendum.