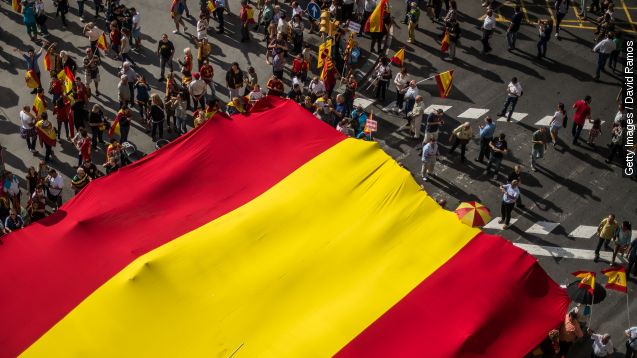 Greece's economic woes lately have overshadowed some of the Eurozone's other struggling economies, including Spain. (Video via Youtube / Alessandro Del Prete)

Months ago, as Greece neared the Eurozone's exit door, analysts began theorizing that Spain might be one of a handful of countries to follow it if it left. (Video via Al Jazeera)

But now, Spain's economy is recovering at a rate that has the country's central bank raising its growth forecast every couple of months — most recently to 3.1 percent, more than twice the Eurozone's forecast overall.

So why is Spain moving up while Greece is sinking lower, when the two seemingly have so much in common? That's the thing: They don't.

Specifically, when it comes to the country's leadership, Spain couldn't be more different. While Greece elected an anti-austerity government in Syriza, Spain's government, under Prime Minister Mariano Rajoy and his People's Party has strongly backed the Eurozone. (Video via Spanish Congress of Deputies, Deutsche Welle)

Spain's enacted broad tax reforms, cutting corporate taxes and taxes on its wealthiest citizens, while Greece's leadership has focused on preserving pensions for middle and lower income brackets, those most affected by austerity, and it's refused to hike certain taxes.

So why did the parallels emerge in the first place? A lot of it had to do with the popular anti-austerity demonstrations seen in both countries. (Video via CCTV)

Syriza's rise in Greece was accompanied by the increasing popularity in Spain of far-left, anti-austerity Podemos, led by Pablo Iglesias, a former political science professor. (Video via BBC)

Iglesias appeared alongside Syriza's leader, and current Greek prime minister Alexis Tsipras ahead of elections in Greece, and both parties were grouped together as the future of Europe's worst hit economies, rising up against austerity. (Video via El Diario)

That pairing may have obfuscated the difference in the two countries' economies, with Spain quickly recovering since its low-point in 2013, while Greece has lagged, and its growth has stagnated. (Video via Press TV)

As The Wall Street Journal reports: "Support for Podemos—Syriza's sister party in Spain—has plunged. Polls now show a four-way tie in Spanish politics, with support surging for the new center-right, pro-business party Ciudadanos. As a result, Podemos's chances of entering a coalition later this year are small and diminishing."

In the meantime, Spain's leadership has urged Greece to follow through with the European Central Bank's proposed reforms, saying they were key to the Spanish recovery. (Video via EurActiv)

But Spain isn't out of the woods yet either: despite its rapid recovery, its unemployment rate hasn't significantly decreased, still hovering above 25 percent — something economists say signals enduring risks. (Video via CNN)

This video includes images from Getty Images and Tomás Fano / CC BY SA 2.0.