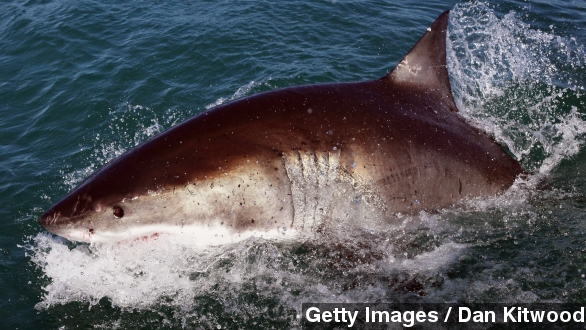 Two women are alive after a very close encounter with a great white shark. They were clearly shaken up by what happened.

Ida Parker and Kristin Orr had taken their kayaks out in Plymouth, Massachusetts. A shark flipped them and had one of the kayaks in its jaws. As the day went on, other stations spoke with them, and you can see the initial shock seem to wear off ...

"It was dark gray, pointy nose, big teeth, big eye. It was right next to me. It was petrifying."

The pair waited in the water that long for someone to see them and get rescue help.

"I saw about four feet of it breach out of the water and latch on to her kayak. ... There's nobody around."

"The friends tried to keep each other calm while they waited in the water for help, wondering if the shark would come back."

Experts examined the bite marks and confirmed this was a great white, probably about 14 to 16 feet long. That's the average size of a female great white.

Just last week, a great white was spotted not far from Plymouth, off the coast of Duxbury, Massachusetts. It's unclear if it was the same animal.

Police captured this footage of that shark. As for the attack, Parker and Orr were out around sunset Wednesday and looking to see seals. Sharks are known for eating seals. They say they saw no fins, no warning the shark was there until it flipped them.