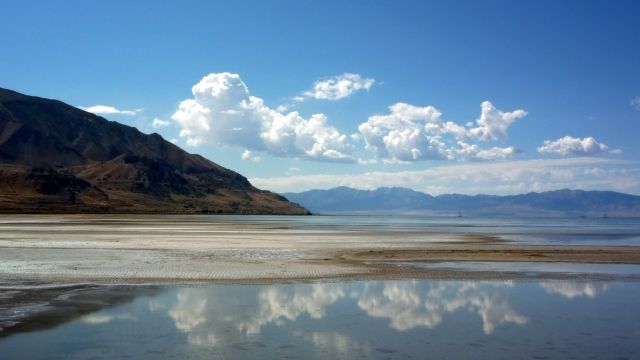 SMS
The Great Salt Lake Reached Its Lowest Water Level On Record
By Lindsey Pulse
By Lindsey Pulse
November 5, 2016
NASA photos of the lake show its shoreline has receded about 11 feet since 1847.
SHOW TRANSCRIPT

The Great Salt Lake is drying up — fast.

New photos from NASA's Earth Observatory show the body of water has reached its lowest level on record.

SEE MORE: These Retirees Found One Of The Oldest Shipwrecks In The Great Lakes

The lake is a terminal basin, which means it's the last stop for water flowing into it from rivers and streams.

And for about 150 years, people have been taking more water out of the lake than what's pouring in. The observatory estimates humans take 40 percent of the water from rivers that's supposed to make its way into the basin.

That's caused the shoreline to recede 11 feet since 1847.

But human consumption isn't the only thing making the lake shrink. The water shortage can be traced to the drought along the West Coast and rising global temperatures due to climate change.

And this isn't great news for Utah's economy. The lake's minerals are key moneymakers for the state, and the lake drying up means companies don't have as much to extract and sell.

It's not just the economy that might see problems. The lower water levels can have environmental effects, like causing dust storms and hurting animal species.

The good news is the lake has seen dry cycles before, and reports say those didn't cause long-term changes in the basin.