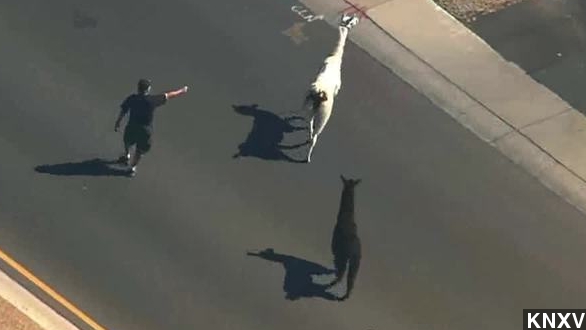 Was it a tale of two love birds looking for freedom? Or were escaped rebels looking to wreak havoc on the streets of Sun City, Arizona?

The whole world was watching and tweeting about Thursday afternoon's breaking news: llamas on the loose.

"These are live pictures right now. This is live footage you can't make up. There is no word on who owns these llama or where they belong," said a newscaster for MSNBC.

Social media was rooting for the furry duo with #TeamLlama, and hey, so were we.

Now there was a little confusion about whether the galloping pair were actually llamas or alpacas. Yeah, we're looking at you, CNN.

In case you didn't know, this is an alpaca. Duh.

But back to the so-called "great llama chase of 2015." Just as it seemed they were out of the woods, out of nowhere appeared a posse of humans ready to crush some llama sprits. In a flash, they had the black and white llamas surrounded.

Fox News reports, "Maybe they're trying to separate them. They seem to very much enjoy each other's company and don't seem know what to do. it appears we have now got a zone defense working on them. ... Fox News can confirm, black llamas are faster than humans."

But not fast enough. Black llama was eventually "taken into custody." Yup, that headline is real. Now he's probably sitting in a holding cell with his hooves cuffed together, waiting to be bailed out.

It didn't end there, though. White llama managed to keep focused on the cause, running down the street toward the hope of freedom. Uh, oh. Here comes the truck. Is that a lasso? White llama's caught, and the defense rejoices.

But White Llama's athletic efforts didn't go unnoticed with Sports Illustrated tweeting, "And with the first pick in the draft, the @TBBuccaneers pick the white llama."

So if it's not stuck in a striped jumpsuit behind bars, maybe we'll see white llama take the field because as the Buck's replied, "Gotta love how well he avoids the defense."

Crazy story, but at least you probably don't have to worry about fugitive llamas tearing around your neighborhood, right?

Wrong! As The Washington Post reports, "Llamas are literally everywhere." As of 2012, more than 76,000 llamas reside in the U.S. Check under your beds, kids.

This video includes an image from Patrick Furlong / CC BY 2.0 and sound effects from Simon Lacelle / CC BY NC 4.0 and Maximilien / CC BY 3.0.