'Grease: Live' Was The TV Musical That We Wanted 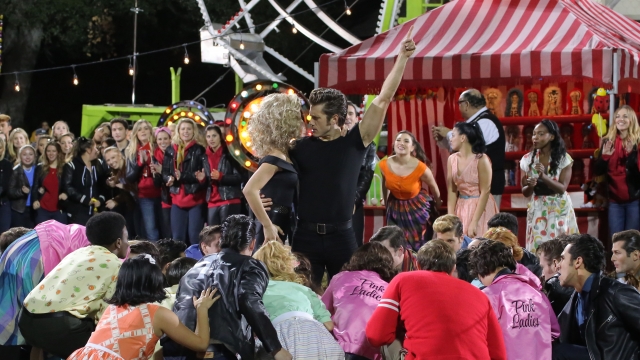 SMS
'Grease: Live' Was The TV Musical That We Wanted

By Lexie Hammesfahr
February 1, 2016
The highly praised show was dedicated to Vanessa Hudgens' father, who passed away the day before the show.
SHOW TRANSCRIPT

Early numbers show the telecast brought in 12.2 million viewers, topping every live musical effort by NBC except 2013's "The Sound of Music," which had an audience of 18.3 million viewers. (Video via Fox / "Grease: Live!")

Spread across 14 sets on 20 acres of the Warner Bros. lot in Los Angeles, the $16 million production went off with only a few minor sound issues.

But the musical performances, including the finale — which took place at a functioning carnival — more than made up for the glitches. (Video via Fox / "Grease: Live!")

We now firmly believe that Julianne Hough was placed on this Earth for the sole purpose of playing Sandy. We already knew she had the dance moves, but the vocal cords? They blew us away. (Video via Fox / "Grease: Live!")

Equally as impressive was Vanessa Hudgens' Betty Rizzo. Hudgens delivered powerful vocals and a sassy attitude only hours after announcing her father passed away from cancer. (Video via Fox / "Grease: Live!")

And the inclusion of artists like Boyz II Men, Jessie J and Joe Jonas' band, DNCE, helped send the show over the top — and Twitter into a frenzy. (Video via Fox / "Grease: Live!")

But really, what set the bar high for future TV musicals, including Fox's upcoming "Rocky Horror Picture Show," was the camera work.

The entire production ended up looking more like a movie than a musical, and that was thanks to steady cameras and unique ways of getting around the more theatrical aspects of the show — like using a shaky camera to add effect to the Thunder Road race. Obviously, that's not a race that could've actually happened on a studio lot. (Video via Fox / "Grease: Live!")

And the fact that they were able to pull it all off in front of a live audience — something former TV musicals hadn't done — deserves a lot of recognition. Just next time, maybe tell those fans to dress the part. We don't need to see trendy girls in ripped jeans in those bleachers. (Video via Fox / "Grease: Live!")