Grand Jury Will Not Indict Officer Who Killed Eric Garner 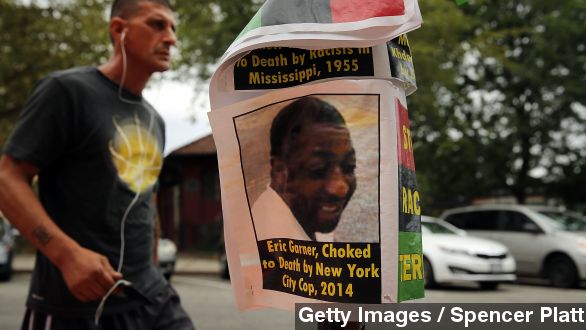 By Jamal Andress
December 3, 2014
The NYPD officer responsible for the chokehold death of Eric Garner will not be indicted.
SHOW TRANSCRIPT

The NYPD Police Officer Daniel Pantaleo won’t face criminal charges after his chokehold led to the death of Eric Garner in late July.

Eric Garner died in July – about three weeks before the Michael Brown shooting.

Much like Brown’s death in Ferguson, the death of Eric Garner – and the video documenting it – lead to protests throughout New York.

In September, shortly after Garner’s death was ruled a homicide by NYC’s medical examiner’s office, Staten Island District Attorney Daniel Donovan Jr. put together a grand jury to decide whether Pantaleo would go to trial.

“I hope that officer Pantaleo is indicted.”

“Any thoughts on what the charges should be?”

Ahead of the decision not to indict Pantaleo, the NYPD commissioner said the department has been preparing for months.

“We’ve been conducting community meetings throughout the city. We’ve also been tactically preparing in terms of bringing in resources to deal with any eventuality. You hope for the best and plan for the worst.”

A WABC reporter says the Garner family is astounded and and astonished by the decision.

Derek Chauvin To Be Sentenced Today

Inside A U.S. Refuge For Transgender Asylum Seekers