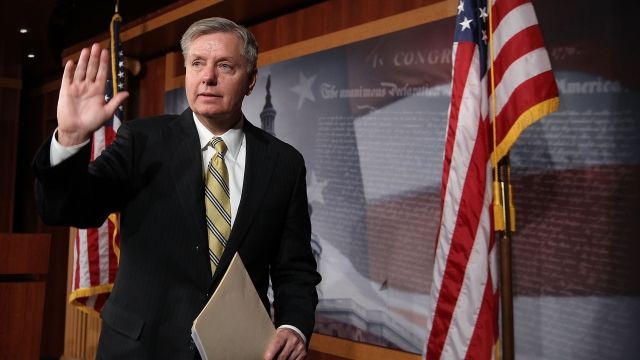 SMS
Trump Could Disrupt Graham's Bill To Help Undocumented Immigrants
By Ethan Weston
By Ethan Weston
November 30, 2016
Sen. Lindsey Graham is working on a bipartisan bill to protect undocumented immigrants who came to the U.S. as children.
SHOW TRANSCRIPT

South Carolina Sen. Lindsey Graham, a Republican, told Politico he's been talking to Republicans and Democrats about a bill to protect undocumented immigrants who came to the U.S. as children.

After ending his presidential bid, Graham became one of Trump's biggest detractors in the Republican Party. Graham said he couldn't go where Trump was "taking the [Republican] party" and called on party members to unendorse Trump.

The senator hasn't always been a fan of stand-alone bills that protect young undocumented immigrants.

SEE MORE: These Successful Immigrants Are Injecting Billions Into The US Economy

"You're wasting your time. We're not going to pass the DREAM Act or any other legalization program until we secure our borders," Graham said in a speech to the Senate in 2010.

But Graham has been a proponent of comprehensive immigration reform for years and was part of a bipartisan group known as the Gang of Eight working toward that end.

Graham said the bill wouldn't be up for a vote until next year when Trump will already be in office — so the new president and the Senate might be headed for a fight.