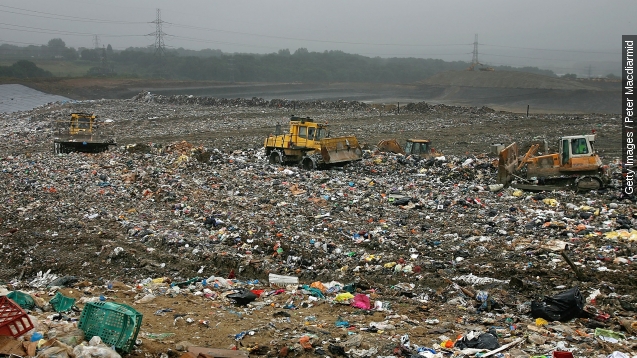 Are we throwing away too much food? The government seems to think so.

The U.S. Department of Agriculture and the Environmental Protection Agency announced Wednesday the nation's first goal toward cutting food waste.

That's because, according to the government, we throw away about 133 billion pounds of food each year. To put that into perspective, that's 31 percent of the overall national food supply.

This much waste could be because our eyes are bigger than our stomachs or because some of us will only eat really good looking produce.

It's hard to gauge how much food is wasted from the farm to the shelf because the FDA doesn't track it. But farmers have noticed that they are throwing away perfectly good produce because, let's say, a leaf of lettuce has a brown spot. (Video via Harvest Public Media)

It's a long cycle for food that ends up being wasted. If it makes the cut, it's shipped off to the supermarket and loaded onto the shelf. But even then, stores still chuck produce that could have lasted longer. (Video via Environmental Protection Agency)

"Whatever ended up here was good for maybe another two weeks or so," California landfill manager Cesar Zuniga told NPR.

There are other options for managing waste, such as donating excess food. But as one farmer told PBS NewsHour, there needs to be more economic incentives for companies to do so.

The government's plan is to raise awareness and maybe even pass legislation to cut waste by half in the next 15 years. And it could work, that is if consumers can accept some food that's less-than-perfect.