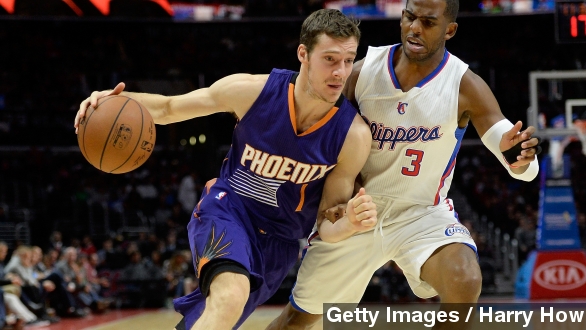 SMS
Goran Dragic Deal Highlights Wild NBA Trade Deadline
By Jay Strubberg
By Jay Strubberg
February 20, 2015
The wheeling and dealing was rapid fire throughout the day in what was one of the busiest and frenzied NBA trade deadlines in history.
SHOW TRANSCRIPT

The NBA trade deadline has come and gone but not before a wild bit of last minute shuffling. Let's get right to the deal everyone's talking about.

Point guard Goran Dragic. The 28-year-old Slovenian recently slammed the Suns for not giving him enough playing time, so he made it known he wanted to leave the team.

"I don't trust them anymore. It happens too many times. Two or three times and, you know, they gave promises. I mean, it's hard," Dragic said.

Well, Dragic's wish was granted Thursday. Phoenix traded him and his brother, Zoran, to the Miami Heat in exchange for three role players and two first round draft picks.

And, while this is nowhere near the magnitude of say, the Lebron James decision a few years back ...

"I'm gonna take my talents to south beach and join the Miami Heat."

... Sports analysts say Goran Dragic, who's kind of flown under the radar, is a sharp-shooting point guard that's just starting to catch his stride.

One who fits in perfectly with Miami's current lineup to really create some havoc in the postseason if they can hold on to a playoff spot.

Dragic was clearly pumped about the move, saying he's "excited to bring the Dragon's fire to Miami!!" ... Well, that's certainly marketable on jumbotrons.

Dragic, of course, wasn't the only one on the move. In fact, the wheeling and dealing was rapid fire throughout the day in what was one of the busiest and most frantic NBA trade deadlines in history. So, let's keep this simple: players and locations.

Point guard Reggie Jackson is headed to Detroit after a three-team deal.

D.J. Augustin and Enes Kanter will rumble up and down the court for the Thunder.

Power forward Thaddeus Young will get no sleep until Brooklyn.

We're sure we left out a few names. In fact, we're positive. ESPN says a total of 39 players switched teams Thursday.

It was such a cluster of player swaps that Philadelphia center Joel Embiid could barely wrap his head around it.

But, thankfully, we weren't the only ones confused by all the last minute switcheroos. As Deadspin put it: "What the hell just happened?" Yep, that pretty much sums it up.