GoPro Could Be Preparing Its Own Drones 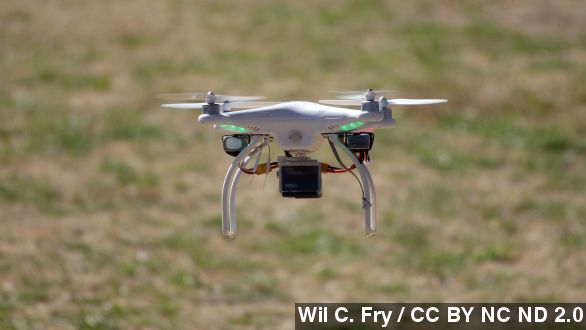 SMS
GoPro Could Be Preparing Its Own Drones
By Evan Thomas
By Evan Thomas
November 26, 2014
GoPro could be releasing its own action-cam-equipped drones next year, according to a Wall Street Journal report.
SHOW TRANSCRIPT

GoPro action cameras and drones to mount them on are a match made in heaven — or, at least, a match made somewhere under the FAA-mandated 400-foot flight ceiling for private remote aircraft.

The Wall Street Journal reports GoPro is preparing to offer its own remote drones carrying its popular action-cam tech. They'll reportedly be ready to fly in late 2015.

GoPro already shows off user-submitted drone footage, all shot on its cameras to begin with. The Verge says as business decisions go, this one seems to be a no-brainer.

"GoPro's reputation and dominance of the action cam market will likely put its future competitors on the defensive immediately."

And that's assuming the Federal Aviation Administration clears the idea for takeoff. As we mentioned earlier, private drones can fly as long as they stay under 400 feet — but commercial drones are subject to much stricter rules. (Video via Tested)

The FAA designated six commercial drone testing sites across the country about two years ago, and since then it's kept the lid on them.

Remember Google's Project Wing drones? The company had to go to Australia to do its testing because it didn't get FAA clearance.

And the FAA's proposed plans might well bring down the nascent U.S. drone industry regardless. (Video via Amazon)

Citing people familiar with the FAA's plans, The Wall Street Journal reports commercial drones are going to have to stay below 400 feet, just like private flights; happen only during daylight hours, and they must maintain line of sight with operators — who must also be trained pilots.

The FAA is expected to officially propose the rules in January.