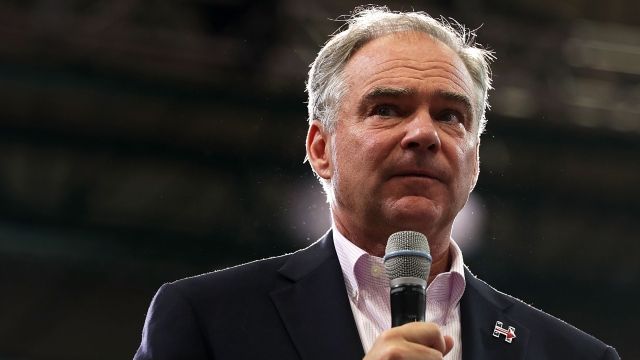 SMS
The GOP's Tim Kaine Attack Ad Could Backfire With Black Voters
By Eugene Daniels
By Eugene Daniels
October 3, 2016
It hits Kaine on the defendants he represented as an attorney and a commutation he granted while governor of Virginia.
SHOW TRANSCRIPT

Just about 24 hours before Sen. Tim Kaine hits the stage in the only vice-presidential debate, the GOP is shifting its sights away from his running mate and toward him with a new ad.

It hits Kaine on the defendants he represented as an attorney and a commutation Kaine granted while he was governor of Virginia. The GOP and one of its spokesmen retweeted (and eventually deleted) articles on the ad that deemed it a "Willie Horton-style attack."

If you don't know what that means, you're probably not alone.  It's from the 1988 presidential campaign.

That attack hit then-Democratic nominee Michael Dukakis' policy of weekend prison passes while he was governor. Willie Horton took a weekend pass and committed assault, rape and an armed robbery.

This new ad is basically the same style as the Horton ad: It's a hit piece with an ominous voice tying a nominee to convicted criminals, and it's meant to scare voters.

And it makes sense for the GOP to use fear as a tactic. The Republican nominee has been using the fear tactic during his entire campaign.

But tying the Horton ad to the Kaine ad so explicitly, even by just retweeting, is a weird choice. The Horton ad played on racial fears of black men, and even mentioning it brings all that up.

And with Donald Trump polling in the very low single digits with black voters while seemingly trying to ask for their vote, that connection could send the few already on the Trump train jumping off pretty quickly.