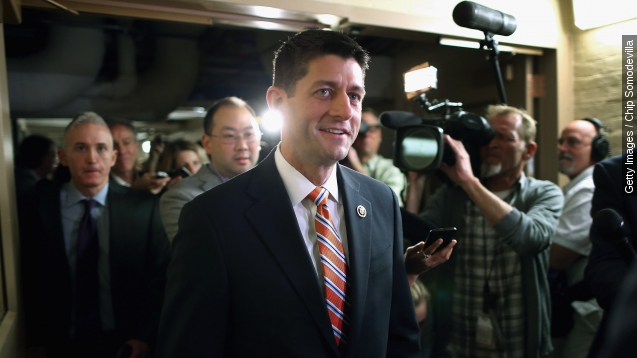 It seems like most House Republicans agree, Paul Ryan is the No. 1 pick for Speaker of the House.

"If he decides to do it, he'd be an amazing speaker," Rep. Kevin McCarthy, who recently dropped out of the race, said Friday.

"If Paul Ryan gets in the race, I'm a huge fan of Paul Ryan, I will support Paul Ryan. I would hope that he would do it," Rep. Jason Chaffetz said.

"I did everything except carry his gym bag this morning trying to get him to do it," California Rep. Darrell Issa said.

And after making it clear he wasn't interested in running, Ryan has said, at the very least, he will consider it this weekend.

"Right now, I'm just going to catch my flight so I can make it home for dinner," Ryan said on his way out of D.C. Friday.

No matter what he chooses, it's going to be a tough decision for Ryan. It's no secret the next House Speaker will become the leader of a very splintered Republican Party and it may take more than one person to help bring the party together. (Video via C-SPAN)

As one Washington Post reporter put it: "the new speaker and team will grapple with the same underlying problems — the same irreconcilable issues."

But if there is anyone in Congress to do it, Ryan may be the most equipped. He's been able to appeal to both the Republican base and grassroots groups like the Tea Party. (Video via NBC)

So with all of this pressure and support from his party, why isn't Ryan jumping at the chance? Well, his possible presidential aspirations. (Video via C-SPAN)

Ryan has obviously stayed out of the 2016 fray but at just 45 with such strong support and national clout, a presidential campaign in years to come is not out of the question. (Video via Paul Ryan)

If that's the case, being the very public face of a fractious House may not be in his best interest.

And history wouldn't be on his side either. The last Speaker to become president was James K. Polk. In 1844.