GOP Leaders Struggle With The Realization Trump May Be Their Nominee 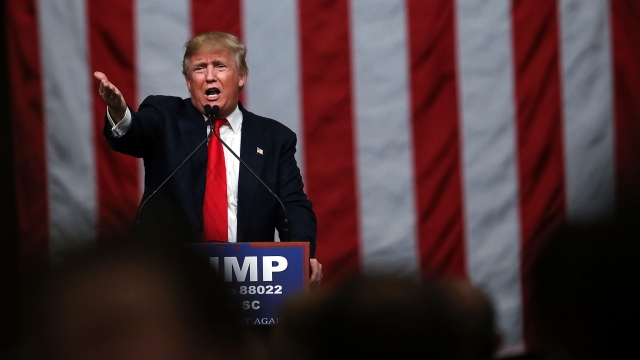 It's no secret that a lot of Republican leaders don't relish the idea of a certain candidate's nomination.

"I don't think it's fair the way that the establishment is treating Donald Trump. I'll be honest with you," Trump told CBS.

But with Super Tuesday nearly here and Trump polling solidly ahead in most states, it's looking like the party might have to come to terms with its front-runner.

In a flurry of articles over the weekend, political reporters shared their insights into how the party is handling the realization.

The New York Times paints a picture of a GOP leadership that desperately wanted to come together behind a single establishment candidate but which "has been gripped by a nearly incapacitating leadership vacuum and a paralytic sense of indecision and despair."

Other reports have shown more and more people within the party leaning toward the old adage, "If you can't beat 'em, join 'em."

"There is no one who is better prepared to provide America with the strong leadership that it needs," Christie said.

Nowhere was that more evident than in Gov. Chris Christie's endorsement of Trump on Friday, but Christie's not alone.

Trump has also managed to get a sitting senator's endorsement, with Jeff Sessions offering the front-runner his support Sunday.

A survey of GOP insiders conducted by Politico last week showed a sharp pivot toward Trump, with one saying the candidate "continues to be a heat-seeking missile in the GOP, blowing up every obstacle in his way."

But he will have some obstacles left, even if he dominates the field from here on out.

Marco Rubio, perhaps the establishment's favorite candidate, has discussed ways he might be able to take the nomination from Trump at the convention if no single candidate wins the first round of ballots.

And the Times report says Senate Majority Leader Mitch McConnell plans to take the fight all the way to November, allowing Republican lawmakers to run attack ads against Trump so they can distance themselves from the candidate. McConnell reportedly said, "We'll drop him like a hot rock."

Trump leads the field so far with 82 delegates, compared to Ted Cruz's 17 and Marco Rubio's 16 delegates.