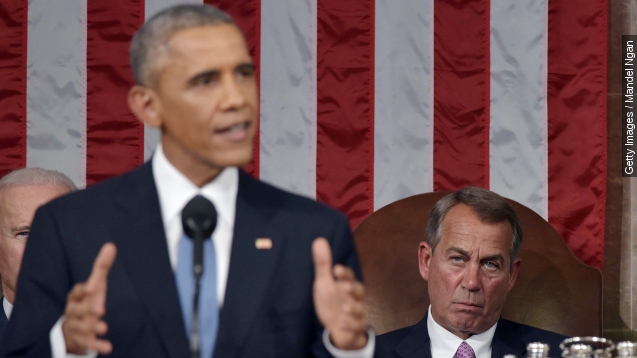 SMS
GOP Considers Suing Obama After Congress Secures Iran Deal
By Eugene Daniels
By Eugene Daniels
September 10, 2015
Congress didn't get to look at various "side deals" of the Iran nuclear agreement before voting on it. The GOP says that means Obama broke the law.
SHOW TRANSCRIPT

Thursday, Senate Democrats paved the way for the Iran nuclear deal to pass safely through Congress, despite multiple attempts to kill it.

But House Speaker John Boehner said the next step may be a lawsuit against the president. Boehner says President Obama broke the law by not giving Congress all the information on the agreement.

"This debate is far from over. Frankly, it's just beginning. We'll use every tool at our disposal to stop, slow and delay this agreement from being fully implemented," Speaker Boehner said in a press conference.

"You're dealing with not normal procedure here, even though there have always been IAEA secret side deals that are not revealed to the parties," Marc Ginsberg, former White House adviser for the Middle East, told MSNBC.

The law President Obama is accused of breaking is the Iran Nuclear Agreement Review Act, which basically says Congress has to review the final nuclear agreement. Some lawmakers claim the side deals are part of the full agreement. (Video via The White House)