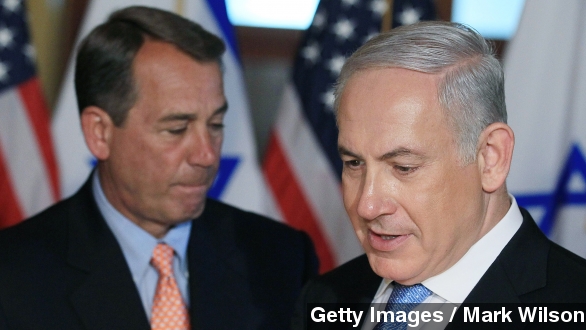 "When Prime Minister Netanyahu indicated a weakness in his commitment, and I think that's putting it charitably, ... he was indicating a difference of opinion not just with President Obama but with the policy that was pursued by President Bush and the policy that is strongly supported Democrats and Republicans in the United States Congress," said White House Press Secretary Josh Earnest.

The Obama administration and Israeli Prime Minister Benjamin Netanyahu have been on the outs lately — which is something House Speaker John Boehner hasn't exactly been trying to fix.

"Let me congratulate my friend, Benjamin Netanyahu, on his party's victory this week ... This is an opportunity to renew our commitment to confront these threats and continue to strengthen the bond between the U.S. and Israel," said House Speaker John Boehner.

Haaretz writes, "Although Boehner's visit was planned before the election, it will be a sort of 'victory celebration' for Netanyahu and he is expected to be received with great honor."

Obama's call to Netanyahu following his reelection wasn't much of a "victory celebration." An unnamed official told reporters Obama congratulated Netanyahu, but also told the Israeli leader he might "reassess" the relationship between the U.S. and Israel.

But Republican 2016 Presidential hopefuls are taking advantage of the tension, congratulating Netanyahu on Twitter and calling him a true, extraordinary leader and a man of "courage, candor and strength."

And in a Facebook status Mike Huckabee said Netanyahu's win, "proves that not even Obama's team could do the magic when Israelis know their existence in on the line."

Republicans have a lot to gain by being seen as more pro-Israel than Democrats. The Jewish vote has traditionally gone to Democratic candidates, but that has been changing lately.

A Pew Forum analysis of exit poll data shows in the 2014 midterm elections, 33% of Jews voted for Republicans. That was a pretty big increase from 12% in 2006.

"Here is what I don't understand," King said. "I don't understand how Jews in America can be Democrats first and Jewish second and support Israel along the line of just following their president."

But for the GOP, supporting Netanyahu could mean breaking away from the party's official platform. During the election Netanyahu said he was against a Palestinian State, something he later took back. The White House didn't put a lot of stock in that retraction.

"Even the divergent comments of the prime minister legitimately call into question his commitment to this policy principle and his lack of commitment to what has been the foundation of our policy making in the region means the U.S. should rightfully reevaluate," said Earnest.

So if Netanyahu showed his true feelings in those campaign comments, supporting him isn't technically in line with the GOP's official stance. Its current platform states, "we envision two democratic states – Israel with Jerusalem as its capital and Palestine – living in peace and security."