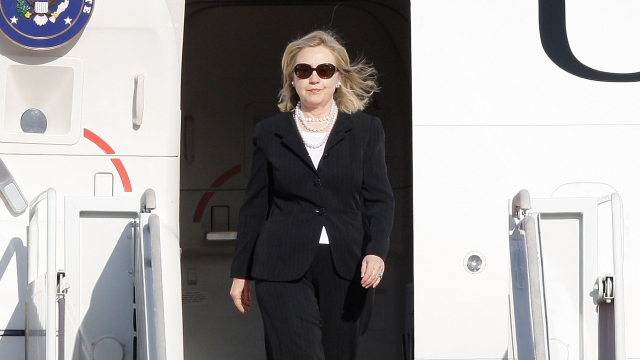 SMS
GOP Shifts Focus From Clinton's Emails To Daily State Dept. Schedule
By Eugene Daniels
By Eugene Daniels
August 27, 2016
The State Department says it won't be able to release the full schedule until the end of the year.
SHOW TRANSCRIPT

This week, the GOP seemed to focus a little less on Hillary Clinton's emails and a lot more on her schedule from her time as secretary of state. The State Department says it won't be able to release the entire schedule until just before the new year.

Donald Trump's campaign has seized on this as proof the election is part of a "rigged system." In a statement, the campaign called it "unacceptable that the State Department is now refusing to release her official schedule before the election in full. Voters deserve to know the truth before they cast their ballots."

Similar statements were released by other Republican leaders, including GOP chairman Reince Priebus, who called on Clinton to "call for their release or release them herself." The GOP is hoping to find something untoward in the Clinton schedule while also painting her as untrustworthy.

This all comes after a controversial story by the Associated Press reporting, "More than half the people outside the government who met with Hillary Clinton while she was secretary of state gave money ... to the Clinton Foundation." That number has been criticized by the left for relying on an incomplete count of Clinton's appointments.

Clinton has denied any wrongdoing and has repudiated the Associated Press for that report. She told CNN: "My work as secretary of state was not influenced by any outside forces. I made policy decisions based on what I thought was right."

Seven months ago, a federal judge ordered the State Department to release monthly batches of the former secretary of state's daily schedule. But the judge never gave a timeline for those releases, and it looks like her full schedule won't be made public until around Dec. 30.

The release is part of a Freedom of Information Act request, and the State Department has basically conceded it's struggling to fulfill not just this request but FOIA requests of all kinds. A spokesman told CNN it is working diligently but "must assess our ability to respond to each FOIA request against our commitments in a large number of other FOIAs."