Google Wants You To Use Gmail To Pay Your Bills 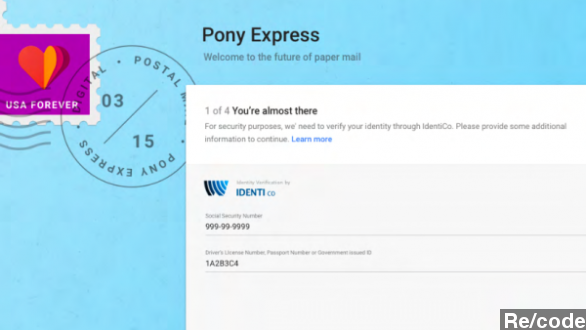 SMS
Google Wants You To Use Gmail To Pay Your Bills
By Mikah Sargent
By Mikah Sargent
March 25, 2015
Google is working on a service that will let users receive and pay bills all from within their Gmail inbox.
SHOW TRANSCRIPT

Like it or not, email isn't going away just yet. But if we have to keep using the antiquated messaging platform, it might as well be more useful.

A new report from Re/code claims Google is working on a payment system that would allow its users to receive and pay bills all from within their Gmail inbox.

The outlet says Google calls the service "Pony Express" internally, but the name could change in the future. (Video via Google)

"Manifest destiny to unite the continent, if only for a brief time, in order to guarantee that it could be done," said Harrison Hartley in "The Spirit of the Pony Express."

Yeah, not quite that Pony Express. Google's touting its "Pony Express" as "the future of paper mail," which apparently just means mail without the paper.

To use "Pony Express," Gmail users will need to link up a bank account or credit card, confirm their identity (social security number, driver's license number, etc.), and sign up for paperless billing.

How exactly users link their utility, cable and cellphone bills to Google's "Pony Express" is still unclear, but will likely be fleshed out when — or if — the company announces the new service.

Based on the detailed report from Re/code, we're betting on "when." And considering the potential benefits for Google, the move makes sense.

Consider this from BGR: "Pony Express ... would give Google access to even more personal information than it obtains when users sign up for an account, allowing for more specific targeted advertising."

And this from CNET: "A strong foothold in financial services could give people another reason to stick with Google's products."

But most importantly, as a writer for Engadget notes, more than 425 million people use Gmail, "so Google could stand to make some not-exactly-trivial money if it decided to charge either us users or its service provider buddies for the privilege of full-on digital mail delivery. "

If "Pony Express" does see the light of day, Re/code says we'll get our first look in the fourth quarter of 2015.