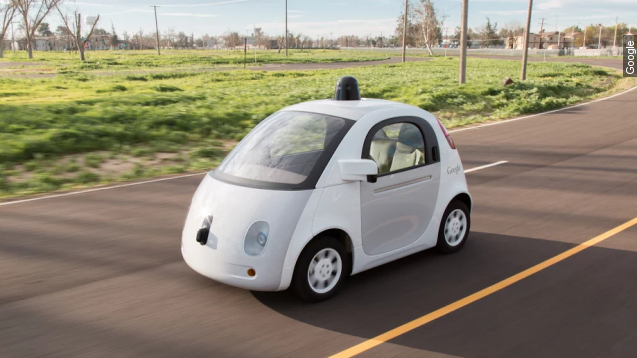 Google just got approval to send its latest self-driving cars out onto public roads.

Its diminutive two-seaters will join the modified Lexus SUVs Google already has tooling around Palo Alto, where they will draw on what those vehicles have already learned during their nearly 1 million miles of autonomous driving.

Google says that mileage is equivalent to about 75 years of your average U.S. driver's road experience.

Each car will carry a backup human safety driver, as they always have, and will be limited to a top speed of 25 miles per hour. (Video via Google)

Google is a leader in the young market for autonomous vehicles, which have yet to see widespread deployment because they're either still in development or still unregulated. In the U.S., for example, only four states have passed laws permitting some operation of driverless cars. (Video via Daimler AG, Audi)

And Google's efforts are closely scrutinized. The company acknowledges reports it's been involved in accidents — 11 minor crashes over six years and 1.7 million miles of combined driving across all its vehicles.

It's hard to say how these numbers compare to plain old human drivers. The National Highway Traffic Safety Administration suggests the majority of minor vehicle damage crashes are never reported.

In any case, Google says its self-driving algorithms were never the direct cause of any of these crashes. Google alleges the one time its vehicle was to blame, it was because a human operator was at the controls.

The obvious solution, then, is to remove the humans. But that's harder than it sounds.

The Verge points out there are some safety scenarios — and some uniquely human driving situations — that autonomous vehicles just can't compute.

"Sometimes, simply moving (particularly in the world's most congested cities) requires a degree of cowboyishness that a stupidity-proof autonomous car can never permit."

Maybe this is what Google means when it says it's focused on "uncovering challenges that are unique to a fully self-driving vehicle." (Video via Google)

Google says its new cars will hit the road this summer.