Google Tests Self-Driving Car That Belongs In A Pixar Movie 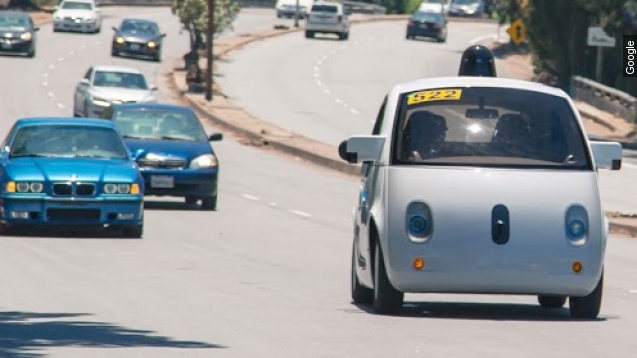 SMS
Google Tests Self-Driving Car That Belongs In A Pixar Movie
By Ben Lawson
By Ben Lawson
June 25, 2015
Google is testing out a self-driving car in California that seems like something out of a Pixar film.
SHOW TRANSCRIPT

And it kinda seems like Google went out of its way to make the car look cute. The front of it looks a bit like a face, and the design reminds us of those Little Tikes cars that exist in every household with a toddler.

So why is Google working so hard to make a car that would seem at home in a Pixar movie?

"In our case we wanted to find something that's very Googley. It's friendly, it’s kind of cute. We hope it fits into neighborhoods," Urmson said.

That could be motivated by some of the mistrust people might have toward self-driving cars.

A 2014 study by Harris Interactive found that 88 percent of American adults would be worried about riding in a self-driving car. (Video via Audi)

So maybe literally putting a friendly face on the car is a bit more welcoming than something like Mercedes-Benz's sci-fi design.

Google got some bad press not too long ago when it revealed the modified vehicles it used to test its self-driving car software had been in 12 accidents over six years. The company described them as "minor" and said they were usually another vehicle's fault.

So if the car wasn't already friendly enough, Google is letting artists submit designs that could appear on the side of its test vehicles.

Google still hasn't announced any kind of launch window for its consumer car, but it's likely years down the road.