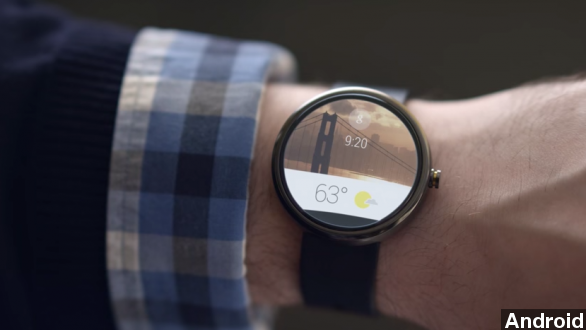 By Madison Burke
June 25, 2014
Google revealed plans to expand into every facet of your life through new versions of its Android OS and beefed-up smartphones and tablets.
SHOW TRANSCRIPT

Google showed off its futuristic new technology in its annual I/O conference for software developers Wednesday. And perhaps getting the most buzz is its new Android Wear smartwatch software.

"All the information you need when you start your day is right there. Today's weather, when your next meeting begins, how long it'll take to travel there." (Via Android)

Google showcased new versions of its Android operating system for all of its upcoming gadgets, urging developers to create apps that take advantage of the new tech. (Via Google Developers)

Google reps highlighted the new Google Fit program that will help users keep track of health data through their Android Wear, smartphones, and tablets. (Via The Verge)

And Google doesn't just want to be on your wrist. It also wants to be in your car.

Google introduced its new Android Auto system that connects your smartphone to your car. This technology powers entertainment systems, navigates via Google Maps and can even read and type a text for you. (Via Android Authority)

Google shared its plans for controlling television through it's new Android TV technology. The technology enables the TV to respond to voice command, lets you mirror your phone on your TV, and even allows you to use your phone as a remote. (Via CNET)

Of course, Google also has plans to spice up its already existing Android products. The new Android smartphones and tablets, called Android L, will have a flat design that will bring more vibrant colors. It will have tons of new features including a "kill switch" for if the phone were ever to get stolen. (Via YouTube / TechnologyEvents)

And the Andoid L is expected to make it so that users no longer need different devices for home and work. USA Today reports "personal data will be separated and secure from work."