Google's Robots And Drones Are Under New Management 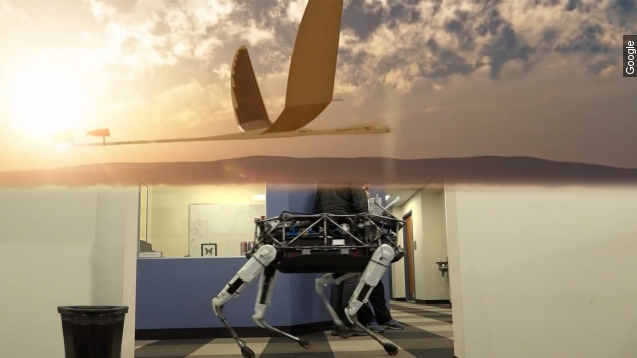 Google X, the group of minds behind the company's self-driving car and its Google Glass device, is taking a couple more projects under its wing.

Google's atmospheric drone efforts, dubbed Project Titan, and its robotics efforts (there are several projects and code names for these efforts) will join the Google X fray. (Videos via FlightBots, Google)

Project Titan, much like the company's Project Loon venture, aims to bring Internet access to places that don't have it. Instead of using a network of Internet balloons, that's what Project Loon does, Project Titan relies on solar-powered drones that can stay in the stratosphere for about five years.

As for its multiple robotics endeavors, the company is reportedly focusing its efforts on robots used in manufacturing. But it's got a little side project cleverly dubbed "Project Replicant." Its task? Robot assistants.

According to Re/code, which first reported on the shake-up, the company felt the projects lacked focus, "The decision to incubate the two nebulous projects inside Google X is designed to direct them toward addressing tangible problems."

Whether that actually happens has yet to be determined. Google Glass — a project notorious for its lack of focus (pun somewhat intended) — was moved out of Google X in order to find a true home for the infamous consumer tech. (Video via Google)

At the same time, Google's self-driving car continues to make progress and headlines, so being embraced by Google X doesn't appear to definitively spell out success or failure. Well, unless you're talking about a face-mounted video camera — if that's the case, your fate is easily predicted.