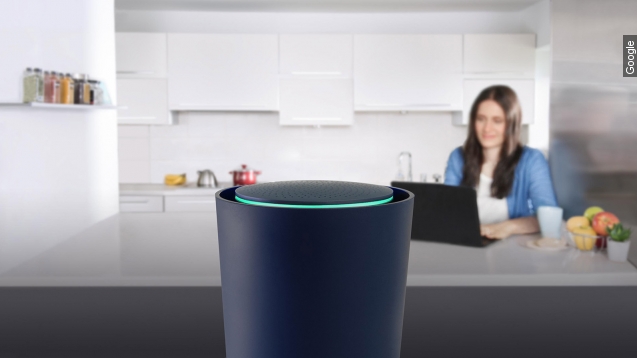 SMS
Google's New Router Doesn't Want Your Internet-Browsing Data
By Mikah Sargent
By Mikah Sargent
August 20, 2015
Google on Tuesday revealed an easy-to-use, high-performance router. And no, it's not interested in tracking what websites you're visiting.
SHOW TRANSCRIPT

Oh yeah, we've all been there. You're in the midst of a particularly dramatic scene in "House of Cards," and suddenly, the video stops. More often than not, it's got something to do with your router — if it's not your Internet service provider's fault, anyway.

Enter Google's OnHub, a router the company claims is the new way to WiFi. That's marketing speak for, "We made improvements to the typical, everyday router." You can pre-order the device for $200. It's set to ship in a few weeks.

OnHub features a modern design that's supposed to keep you from stuffing it away in a cabinet or behind a desk. Because, as you might assume, that's really bad for your WiFi signal.

The company's also made improvements to the antenna and software. It scans the airwaves in your home to find a WiFi channel with the least interference and even lets you prioritize your devices. That way your Netflix-streaming tablet takes precedence over your smart refrigerator.

In other words, it ensures you're not stuck waiting for "Orange Is The New Black" to load while your Internet-connected fridge updates its software.

And while we're on the subject of smart refrigerators, perhaps most importantly, Google says OnHub is future-proofed. It packs in Bluetooth Smart, Weave, and Thread technology — which just means it's got all the tech needed to control all those smart devices you're buying. (Video via CNET)

It all sounds like a helpful iteration on the WiFi router which, for the most part, are flat-out terrible. But with a company as big — and, well, data-collecty — as Google behind the router, people are understandably a bit concerned.

Dan Moren of Six Colors calls the OnHub a Trojan horse. But he explains,   (Video via Warner Bros. / 'Troy')

Google has been explicitly clear about what data it does and does not collect. In a support document, the company states, "The Google On app and your OnHub do not track the websites you visit or collect the content of any traffic on your network."

But the company does track performance data like the strength of your WiFi signal, the types of devices you're connecting and your router's WiFi channel. Google says you can choose to opt out in the router's privacy settings.

And in an interview with Wired, a Google project manager said, "We've drawn a very strong, hard and fast line around inspecting any information or websites about the content you're looking at in your home."

So — for now at least — you can rest assured Google isn't using its router to watch what websites you're visiting, because we all know how that turns out.

"If you want a vision of the future, Winston, imagine a boot stamping on a human face — forever," said Richard Burton. (Video via Atlantic Releasing Corp. / 'Nineteen Eighty-Four')