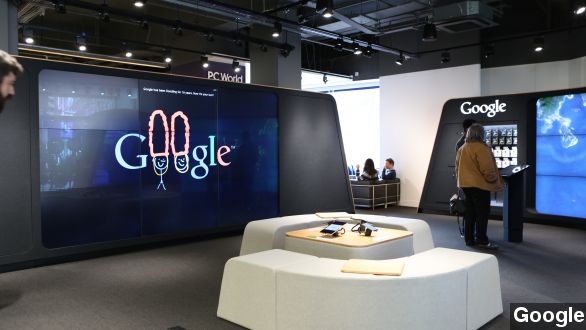 After all the rumors of Google opening its own retail store somewhere in the United States, there is finally a Google brick and mortar business, but it's nowhere near New York City.

Apple's London flagship store is less than a mile away — keep your friends close and your enemies closer, right? More specific still, Google's first ever store is inside another store, Curry's PC World — a British electronics retailer.

According to Google, the search engine's first ever retail store will do a variety of things. Similar to Apple and Microsoft stores all across the U.S., Google store patrons will get a "try-before-you-buy experience" with items like Chromecast computers, Android phones and Google's Doodle Wall. Although we doubt the doodle wall is for sale.

Google also says the new store will offer classes to the public that will range from learning how to use certain Google devices to how to submerge your life in Google products. No word on whether the classes will be free of charge.

Google Spokesman James Elias said in a statement about the new store, "With the Google shop, we want to offer people a place where they can play, experiment and learn about all of what Google has to offer; from an incredible range of devices to a totally-connected, seamless online life."

Oddly enough, according to the Wall Street Journal, Google will not be seeing a dime of profits from the new location. One Chief Executive from Curry PC's parent company said all sales will stay with the host store and called the new location more of a billboard than a real standalone store.

Google also says it will be opening two more locations in London by the end of 2015.