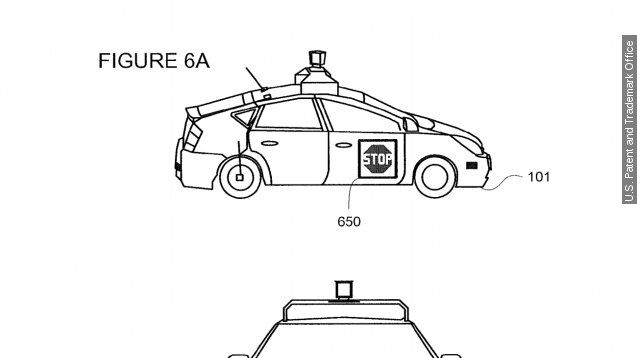 Google obtained a patent for its driverless cars that could help them signal or even talk to pedestrians. (Video via Google)

The cars having these abilities could help in a situation like this one where traffic must yield to pedestrians and getting through the crowd requires a little less patience.

The patent goes over how self-driving cars would identify whether a person on foot is going to cross a street and then how the car would react. (Video via Google)

But that patent also describes some more aggressive ways of making the cars' intentions known to those walking. Like having electronic screens attached to the car, similar to Nissan's concept self-driving car. (Video via Nissan)

There are two more options described in the patent: one where the cars use speakers to communicate with pedestrians and one where the car would have a robotic hand and eyes to signal walkers.

Assuming people on the street actually listen to the car, this could make the cars safer for the people walking as well as the person riding. (Video via Google)

Because, as research has already shown us, people generally accept that self-driving cars will be programmed to minimize accident casualties — even at the driver's own expense.