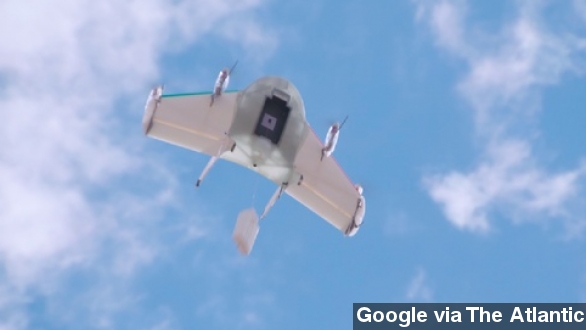 By Matt Picht
August 28, 2014
Google has been developing a drone delivery system of its own, and it hopes to revolutionize how people view possessions with it.
SHOW TRANSCRIPT

We used to think of drones exclusively as high-powered military machines, but that definition has shifted in the last year. From high-tech deliveries to aerial photography to questionable stunts involving fireworks, unmanned aerial vehicles have become the latest tech vogue for some time now.

So, really, this news was inevitable: Google has just unveiled their own take on drones, dubbed Project Wing.

​​The tech giant's research division, Google X, has been working with an Australian UAV company for the past two years on a prototype delivery drone. The team already has a few successful test runs under its belt, but the project is still a long way from commercial application.

A writer for The Atlantic broke the story with a lengthy article on Project Wing, which goes into Google's vision for their drones: to "transform people's relationship to stuff" as part of the so-called "sharing economy."

"The idea goes like this: Because people can't assume near-instantaneous delivery of whatever they need, they stockpile things. ... Each of these things is a personal possession that sits around, embodying all this energy and industrial effort unproductively. ... The world could make much less stuff because efficient, digital logistics would let each asset be used by more people."

That's a bit more ambitious than what Amazon promised when it revealed its delivery drone program back in Dec. 2013 — back then, CEO Jeff Bezos claimed his drones would be capable of 30-minute deliveries by 2018.

But there are still a lot of hurdles between the drawing board and a realistic drone delivery program: object avoidance and a safe delivery method for the autonomous drones are some of Google's main challenges. And then, of course, there are the feds.

Part of the reason Project Wing is operating out of Australia at the moment is because the country has more relaxed drone laws than the U.S. The Federal Aviation Administration has banned commercial drone use until they can work out a set of guidelines — and recent reports suggest that process might take longer than they thought, stretching well past next fall's deadline. (Video via NBC)