Google Photos: The Good, The Bad And The Slightly Creepy 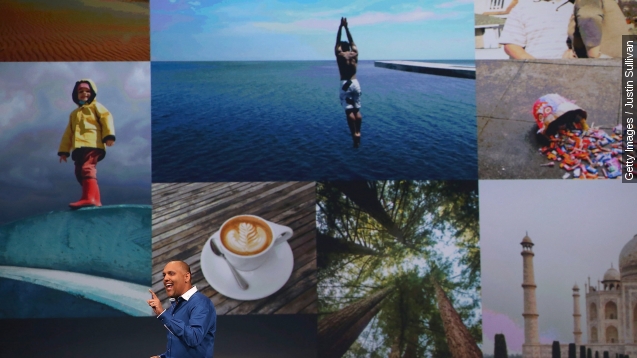 Remember in 2011 when Google announced one of its biggest "whoops" ideas to date?

“Welcome to the Google+ Project. The first thing you want to do is create circles.”

Yeah, that didn’t work out well. Most people opted to stay away from Google’s circles and instead embrace friending or following.

Some accidental victories did come out of the failed experiment though, like Hangouts and Photos.

Of those two features, photos is probably the less celebrated. But many — myself included — found that Photos solved a common issue of the Internet age: backing up pictures taken with smartphones.

Google recently separated Photos from the Google+ app. So if you’re wondering why the G+ app stopped backing up your pictures — surprise(!!) — you probably need to download another app.

Google Photos does everything the G+ app used to do — like auto-upload the images you take — but it also makes them easier to search and gives you more options for editing.

Another plus — pardon the pun — is the pictures the app backs up on Google’s servers are still yours. A spokesperson for Google told Wired:

“Google Photos will not use images or videos uploaded onto Google Photos commercially for any promotional purposes, unless we ask for the user’s explicit permission.”

But! There’s always a but…

You only get 15 GB of free storage if you want to keep your pictures' original quality intact. Otherwise you can upload as many compressed but still "high quality" photos as you want.

To be fair, 15 GB is probably enough for most people. But considering this app is backing up your photos and any videos you take, eventually that space will run out. Luckily the prices for more space aren’t too terrible.

Some people are also worried about the security of the app. Which is an understandable complaint considering there seems to be a handful of hacks every month. Also, Google has been breached before.

Another thing: the auto-awesome feature is a little creepy. What's happening here is Google's program goes through your auto-uploaded photos and throws them together to make this completely random GIF. But Facebook users who are fans of the “year in review” mashup might actually be into this sort of thing.

So far there's no clear winner in this auto-photo backup area, but others, including Yahoo, Apple and Facebook, are technically in the running. Though Google definitely has my vote for creepiest in-app feature.

This video includes an image from Getty Images and music by Bensound / CC BY ND 3.0.