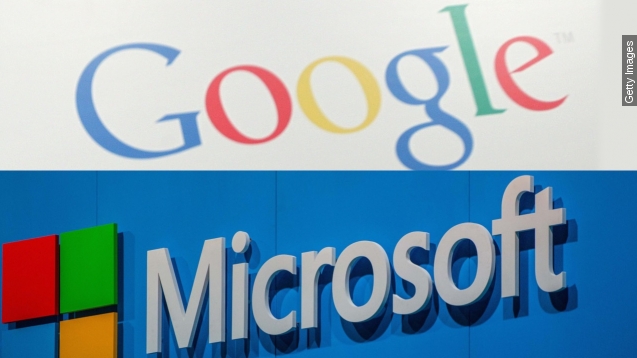 SMS
Google, Microsoft Drop Patent Disputes, Agree To Collaborate
By Mikah Sargent
By Mikah Sargent
October 1, 2015
After five years of patent disputes, Google and Microsoft have cast their lawsuits aside, instead focusing on patent reform and video technologies.
SHOW TRANSCRIPT

Do you hear that? That's the sound of a five-year feud between two tech titans coming to an end.

Wednesday, Google and Microsoft released a joint statement saying, "[The companies] have agreed to collaborate on certain patent matters and anticipate working together in other areas."

According to Bloomberg, those "certain patent matters" involved about 20 lawsuits, which Google and Microsoft have now agreed to drop.

See, Motorola — which was previously owned by Google — said Microsoft's Xbox infringed on some of its patents. (Video via Microsoft)

And Microsoft, in turn, said Android — Google's popular operating system — infringed on some of its patents. (Video via Google)

But now, the companies are casting those allegations aside and focusing, instead, on new video technologies and patent reform.

Patent trolls — those who attempt to make money by using patents to launch costly lawsuits instead of making innovative products — are largely abhorred by the tech industry. (Video via YouTube / Kirby Ferguson)

According to the Bloomberg report, "the two companies are lobbying to ensure [patent troll] lawsuits don’t become as prevalent in Europe as they are in the U.S."

And Google and Microsoft, along with other video-heavy tech companies, recently announced plans to create stronger-better-faster media formats, all as part of the Alliance for Open Media. Not a bad outcome for an about-face.