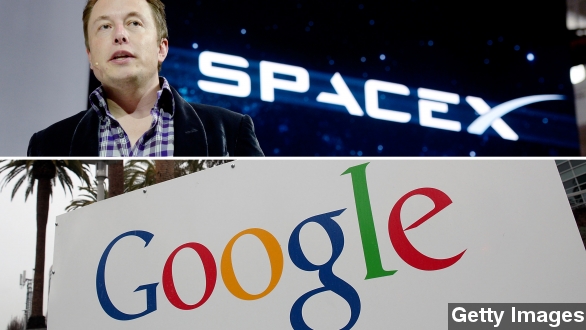 You know how Facebook wants to provide Internet to everyone on the planet? Well, now Google is looking to give Elon Musk's Space Exploration Technologies a hefty $1 billion investment to do the same thing.

According to The Information, Google's investment comes "after its own effort to create an Internet-beaming satellite constellation unraveled." The project is expected to cost around $10 billion and take no less than five years to launch.

Google has actually been trying its hand at several methods of bringing Internet to the world.

It's launching a network of gigantic, long-lasting balloons into the earth's stratosphere and has looked into solar-powered, Internet-connected drones. (Videos via Google, YouTube / FlightBots)

Space Exploration Technologies, also known as SpaceX, wants to launch a series of Internet-connected satellites with speeds that rival the likes of fiber-optic Internet services here on earth.

Musk, in an interview with Businessweek, said, "The speed of light is 40 percent faster in the vacuum of space than it is for fiber. The long-term potential is to be the primary means of long-distance Internet traffic and to serve people in sparsely populated areas."

"The primary means of long-distance Internet traffic" — it's a lofty goal with many unanswered questions.

For instance, how will a company that builds rockets and "free-flying spacecraft" start crafting Internet-connected satellites? (Video via SpaceX)

The Wall Street Journal quotes industry officials who say the company will likely rely on its current systems and manufacturing knowledge to develop the satellites.

In other words, SpaceX will take what it knows about building rockets and spacecraft and apply that knowledge to designing and building satellites.

There's also the question of how the satellites will communicate with one another. According to The Verge, the system would use lasers; this is unlike typical wireless Internet connections which use radio waves for transferring data.

Still, despite some hefty challenges, the overwhelming sentiment seems to be that there's no better team to make an Internet-connected satellite network.

This video includes images from Getty Images and SpaceX and music from Podington Bear / CC BY NC 3.0.