Google May Be Launching Car Insurance Shopping In The U.S. 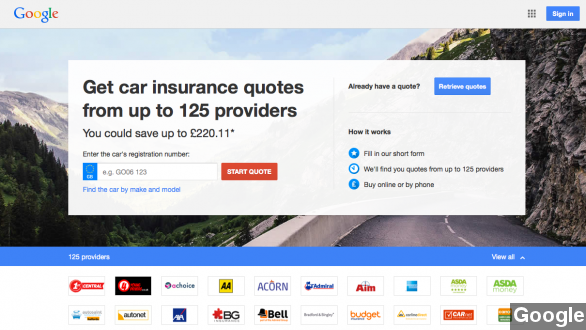 SMS
Google May Be Launching Car Insurance Shopping In The U.S.
By Evan Thomas
By Evan Thomas
January 9, 2015
Google has run comparison car insurance sites in the U.K. for years. Evidence is mounting that the same service could be making its way to the U.S.
SHOW TRANSCRIPT

Cat videos, web search, email: Google is good for all sorts of things. Soon you might be able to add car insurance to the list.

According to a number of reports, Google is about ready to debut an auto insurance shopping site in the U.S. It will look a lot like the tool Google already runs in the UK.

And Google appears to have been getting it ready for years, writes Forrester Research Analyst Ellen Carney. The company is already licensed to sell auto insurance in 26 states.

And it’s linked up with at least one existing insurance shopping site: U.S.-based Comparenow.

So what’s in it for Google — another chance to sell ads against one of its products? That is how the company makes most of its money.

The New York Times says Google could collect referral fees from its partner insurers whenever someone makes a policy purchase through Google’s site. So maybe the ads aren’t as necessary.

A writer at The Verge suggests Google sees opportunity to simply do insurance better.

“Given the technical challenges of managing and comparing the quotes in real-time, there could be a lot of room for technical improvement over the current competitors.”

It would also make insuring those self-driving cars easier, if Google ever gets them to the consumer market.

Carney expects a launch could come sometime in Q1 of 2015.