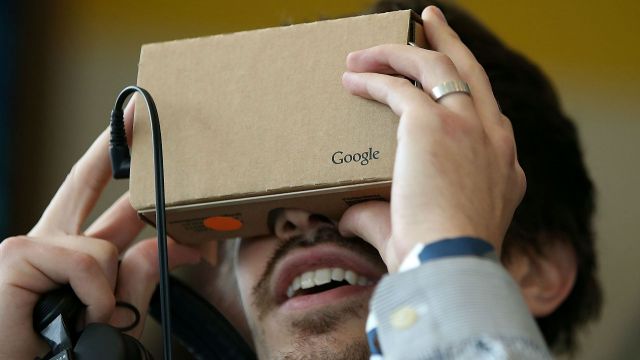 SMS
Google Is Reportedly Making A New Smartphone-Powered VR Headset
By Kaileen Gaul
By Kaileen Gaul
February 7, 2016
Google is working on a new VR headset that works with a smartphone like the Google Cardboard. It could be a competitor to the Samsung Gear VR.
SHOW TRANSCRIPT

We figured Google wouldn't stop at the Cardboard when it came to making virtual reality gear.

According to a report by The Financial Times, Google is working on a new VR headset for smartphones. But this headset will reportedly be made of a solid plastic casing and will be equipped with better sensors.

This makes us think the new Google version will look more like the sleek Samsung Gear VR or an Oculus Rift instead of a shoebox. (Video via Samsung)

The latter two headsets are quite a bit pricier than the Cardboard. Samsung Gear works with a Samsung Galaxy and sells for $99. The Oculus Rift is available for preorder for a hefty $599.

Part of the reason for Cardboard's success is the low cost of around $10 to $25. Five million Cardboards have been shipped to date, but many of these were free to the actual user.

For example, the New York Times sent Cardboards to their million-plus subscribers, Visa and Bank of America gave 10,000 to Patriots fans last year, and Verizon also gave away Cardboards to customers to promote "Star Wars."

Samsung hasn't said how well its Gear VR is selling so it's tough to gauge how much people are willing to pay for smartphone-powered headsets. Google has not announced a price for the new model.